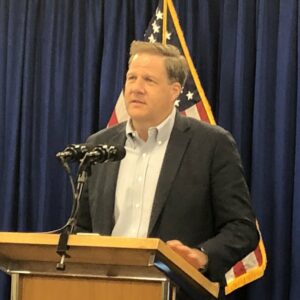 That’s how Gov. Chris Sununu described reports of incidents at schools in Londonderry and Exeter on Thursday, expressing his frustration with education bureaucrats who continue resisting the well-established science regarding students and COVID. At the same time, Sununu told NHJournal he continued to support the principle of local control.

“Those stories absolutely should not have happened,” Sununu said, adding, “If you have a school board taking action you don’t agree with, those parents need to go vote all of those people out.”

In Londonderry, the school board ignored science – as well as dozens of parents pleading for loosening of mask restrictions for students — as temperatures broke the 90-degree mark.

Londonderry School Board chairman Michael Saucier told a packed meeting Wednesday that health officials “all recommend mask-wearing in school buildings for the rest of this school year.”

“I have to say that in supporting the guidelines I am caring about the safety and the health of the children as a top priority,” he said in response to emails asking him to “care about the kids.”

“If the experts say we need to continue to wear masks to keep children safe, that’s what I’m going to follow,” Saucier said.

But “experts” — public health officials at the federal and state level — issued guidance months ago that say school children are at low risk of either spreading or contracting the virus.

Education Commissioner Frank Edelblut and state epidemiologist Dr. Benjamin Chan reinforced the message again on Wednesday, following the outcry in Londonderry. “[We] recommend that … steps be taken to allow masks to come off, even in indoor environments,” they wrote, particularly where mask-wearing becomes unsafe (i.e. in extreme heat.)

And schools were exempt even when the state was under a mask mandate from November to April, allowing for the local control Sununu supports.

The incident in Exeter four days earlier sparked even more outrage. Students attending an outdoor prom were monitored for their vaccination status by having their hands numbered with marker.

“Students who were unable to provide a vaccination card because they did not have or share a card or had not completed the full vaccination process had a number written on their hand,” according to a statement from Exeter High School. “Dancing was divided among three dance floors. During the dancing, after every few songs they were asked to raise their hands to determine who they were around.”

Exeter High Principal Mike Monahan released his own statement. “Our student and parent feedback has been extremely positive regarding the prom experience. We are aware that some concerns have been expressed that students were singled out or had their privacy violated. We made every effort possible – while adhering to contact tracing guidelines – to ensure that this did not happen.”

Asked about these events by NHJournal at his penultimate weekly COVID-19 press conference, Sununu didn’t mince words. “Those stories absolutely should not have happened.”

But, Sununu says local control is the solution. “You have so much more control at a localized level.”

Throughout the pandemic, Democrats have urged Sununu to use state power to set rules for local schools and communities, from mask mandates to deciding whether schools could offer in-person instruction. Sununu was the last New England governor to order a mask mandate and the first to lift it, and he never set a statewide policy for classroom vs. remote instruction.

“I am a diehard advocate of local control,” Sununu said.  “I appreciate everyone’s frustration, but we are not changing the rules around local control. It is what separates us from the other 49 states — having a nimble, responsible system because so much of it happens at the local level.