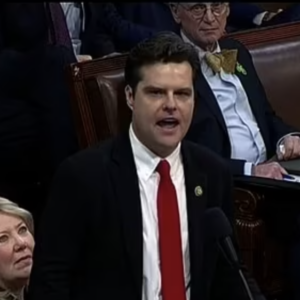 Like the Republicans in Congress currently battling over who will be the next Speaker of the House, New Hampshire Republicans are divided over the leadership fight. Some, such as 2022 congressional candidate Karoline Leavitt, support the 20 or so GOP House members who are blocking Rep. Kevin McCarthy (R-Calif.) from becoming speaker.

Others, like Gov. Chris Sununu, are less enthusiastic about that effort.

“Should we really be surprised that a bunch of morons in Congress are holding things up? Of course not,” Sununu said Wednesday.

Wresting control of the House from Speaker Nancy Pelosi’s Democrats was one of the few bright spots for the GOP in 2020’s disappointing midterm elections. Unfortunately for McCarthy, the margin of victory was far smaller than expected — and the worst performance for Republicans in a Democratic president’s first midterm election since at least Kennedy in 1962. As a result, McCarthy needs all but four Republican votes to get the 218 required to be elected Speaker.

At least 19 Republican members voted for other candidates in the first six rounds of voting over two days. It is a spectacle many in the party find embarrassing.

“I’ve been hearing from a lot of conservatives all day,” former New Hampshire Speaker of the House Bill O’Brien said Wednesday. “They’re saying what’s happening in the House is not leaving a good impression of the party. It makes people say, ‘Look at these bozos, they can’t govern.'”

But Leavitt said she believes holdout members like Reps. Matt Gaetz (R-Fla.) and Lauren Boebert (R-Colo.) — both of whom endorsed her in the NH-01 GOP primary — are doing the right thing.

“I think it’s good they’re debating on the House floor. That’s how it should be,” Leavitt said. Asked who she would be voting for today if she had won in November, Leavitt replied, “Let’s just say I’m old enough to remember when McCarthy spent millions in attack ads against me. And I still won [the GOP primary] by 10.”

Jason Grosky is chair of the Rockingham County Republican Committee, and he talks to rank-and-file party members every day. His take?

“You’d like to see Republicans pull together to do the job we put them in place to do—to govern, to stand up for our principles, and hit the brakes on what’s happened the past two years. So far this week, with the slimmest of majorities, all we’ve done is hit the brakes on ourselves to the delight of our counterparts,” Grosky said.

Some Republicans have taken to calling the holdouts the “Joker Caucus,” a reference to the villain in the popular Batman “The Dark Knight” film. He was described with the line, “Some men aren’t looking for anything logical, like money. They can’t be bought, bullied, reasoned, or negotiated with. Some men just want to watch the world burn.”

But at Granite Grok, a website popular with the far-right and Trump-friendly wing of the party, managing editor Steve McDonald is with the holdouts.

“Everyone runs on bringing change to Washington D.C., but nothing changes. Maybe the folks forgot what change might look like or what was required to get it, and now that it’s here they find they don’t have the stomach for it.

“Until then, we get what looks to some like a slap-fight at a cotillion. But if you don’t want anyone to stand up to leadership that acts like a super-spreader for the Georgetown flu, why bother telling people we need change in Washington?”

Most political observers, however, say the scene from the floor of the House sends a signal of chaos and incompetence that undermines the GOP’s ability to lead. Those concerns only grew at the end of the day Wednesday when, after six rounds of voting without a result, Republicans nearly failed to get a simple majority to adjourn and end the embarrassment.

Democrats, who see the Republican chaos as a political win for their party, opposed the move to adjourn. And they were joined by four Republicans: Reps. Andy Biggs (Ariz.), Lauren Boebert (Colo.), and Matt Gaetz (R-Fla.) and Rep.-elect Eli Crane (Ariz.).

The motion narrowly passed after Rep. Paul Gosar switched his vote, giving the GOP a 216-214 majority.