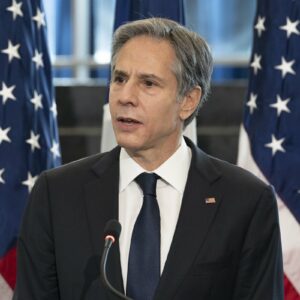 Gov. Chris Sununu, who declared President Joe Biden’s Afghanistan withdrawal a “botched operation,” has written the State Department asking for an accounting of Granite Staters in the worn-torn country. His request comes as reports pour in that Americans in Afghanistan are struggling to get safely to the airport and return home.

“With the tragic humanitarian crisis unfolding in Kabul and the rest of Afghanistan, our office has received countless calls from concerned New Hampshire residents inquiring about the status of all New Hampshire residents currently stranded in Afghanistan,” Sununu wrote to Secretary of State Anthony Blinken. “We all agree this is a matter of the utmost importance, and I look forward to your prompt reply.”

Afghanistan, and in particular its capital of Kabul, was thrown into chaos as the Biden administration carried out its sudden military withdrawal. In the weeks leading up to the final pullout, the U.S. abandoned military bases overnight and left millions of dollars in weaponry to be seized by the Taliban.

Over the weekend, Americans were horrified by scenes of panic and terrific Afghans pushing their way into the airport in Kabul and begging to be rescued. At least seven Afghans died on Sunday, several falling thousands of feet to their death after clinging to the fuselage of an American military transport plane.

The situation is dire for Americans, as both targets of violence and potential kidnap victims in a culture where kidnaps for ransom are common. A Wall Street Journal correspondent reported Taliban fighters going door-to-door looking for people with Western ties.

There is no official accounting of the number of American civilians in Afghanistan. One estimate reported by Josh Rogin in The Washington Post pegs the number at around 10,000.

On Tuesday, CBS News reported that some 5,000 Americans had requested to leave Afghanistan. Unfortunately, the State Department told these American citizens, the U.S. “cannot guarantee your security” on the trip to the airport.

“Thank you for registering your request to be evacuated from Afghanistan,” a note from the State Department read. “Americans in the U.S.….Please make your way to Hamid Karzai International Airport at this time,” “PLEASE BE ADVISED THAT THE UNITED STATES CANNOT GUARANTEE YOUR SECURITY AS YOU MAKE THIS TRIP.”

The outlet also quotes a congressional source who says we have no partners left in Afghanistan to safely get Americans in-country to Kabul. “There are 10-15k [American citizens] who still need to get out, and that obviously doesn’t include the tens of thousands of SIVs or P2 applicants trying to get out of Afghanistan.”

SIV stands for “Special Immigrant Visas” for Afghans who worked with the U.S. and its allies during the 20-year war.

In his letter, Sununu notes the “grave urgency of the rapidly deteriorating situation” in Afghanistan and asks for the answers to three questions:

As of late Tuesday, the State Department had not responded to the letter.

While New Hampshire’s congressional delegation has been reluctant to criticize Biden’s Afghanistan policy — with the notable exception of Sen. Jeanne Shaheen — Sununu hasn’t been shy about sharing his views of what he believes is a fiasco.

During a press briefing on Tuesday, Biden’s National Security Advisor Jake Sullivan was asked if the U.S. military would remain in Afghanistan beyond the August 31 deadline if there were still Americans or Afghan allies awaiting evacuation.

“I’m not going to comment on hypotheticals,” Sullivan said.

“So, you can’t commit to bringing back every American?” the reporter asked.