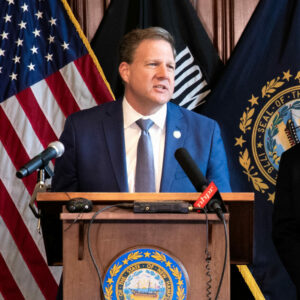 Sununu’s plan includes a one-time $100 dollar grant to some 600,000 electric ratepayers paid for with $60 million in state money to hit sometime this fall. Because the funding comes from the state surplus, legislative action is required. Both state Senate President Chuck Morse (R-Salem) and Speaker of the House Sherman Packard (R-Londonderry) indicated the GOP-majority legislature is on board.

Sununu began his announcement by blasting the Biden administration’s energy policies which he said have added to the record-high energy prices in New Hampshire and across the U.S.

“On Day One, the Biden administration made their progressive agenda on stopping oil and fossil fuels in America very clear,” Sununu said. “With the stroke of a pen and an executive order, they stopped the Keystone Pipeline.

“Since that day, our country has seen a doubling of prices for gasoline and diesel. When you account for the unprecedented spending coming out of D.C. that has unleashed record inflation, the uncertainty in the energy market, the war in Ukraine, the price of natural gas that’s surging — this is hitting everyone,” Sununu said.

Sununu’s proposals include both state funding for the direct $100 credits as well as federal funding for increased aid to families already eligible for subsidies through the Low Income Home Energy Assistance Program (LIHEAP). He is also adding another $7 million in state funds to New Hampshire’s Electric Assistance Program (EAP), which provides eligible customers with a discount on their monthly electric bills ranging from 8 percent to 76 percent, depending on income and size of household.

“Because of these very high rates, this program is at risk of being depleted,” Sununu said. “So we’re asking to move forward with an additional $7 million of our state surplus funds.”

Granite State Democrats have been trying to link the coming utility rate hikes to Sununu’s vetoes of green energy proposals over the past five years.

“Today’s rate increase is a policy failure years in the making,” Democratic gubernatorial candidate Sen. Tom Sherman said in a press release. “Chris Sununu has repeatedly vetoed bipartisan clean energy initiatives that would shift our reliance off of fossil fuels and increase our investments in clean energy.”

Sherman also claims the Public Utilities Commission could prevent the rate hikes from occurring. According to multiple sources, including Consumer Advocate Donald Kreis, that claim is false.

Asked if the commission is “Sununu’s PUC” as Democrats claim, Sununu laughed. “Oh, Lord no.”

On Wednesday, Sununu knocked down what he called “insane” attacks from Democrats that he is responsible for higher utility bills. He laid out a litany of the energy proposals he has vetoed or blocked since becoming governor, all of which would have increased consumer costs.

“One of the biggest issues to hit us just a few years ago was the TCI, the Transportation Climate Initiative. It was touted by Democrats in Massachusetts and all across New England,” Sununu said. “I stood up on Day One and stopped it. That would have been a 17-cent gasoline tax increase, taking another $130 million out of the pockets of individuals in our state alone, every time they filed up their tanks.”

Sununu also pointed to his veto of a proposed utility-bill bailout for wood-burning biomass energy facilities owned by out-of-state companies (“that saved us about $23 million a year”) and Democratic attempts to take away the Regional Greenhouse Gas Initiative rebates currently going to ratepayers.

Most significantly, Sununu said, “in 2020, Democrats in the legislature proposed raising the state’s Renewable Portfolio Standard to 56 percent. That would’ve cost our citizens literally hundreds of millions of dollars over and above what they’re already paying in very high electricity rates.”

Sherman declined to respond to a request for comment, and he failed to provide any data to back up his claims about the impact of his green energy policies on current utility rates. However, the New Hampshire Democratic Party released a statement giving credit for Sununu’s $60 million rate relief plan to the federal delegation. It claimed the state’s current surplus is “the result of federal funds secured by Sen. Shaheen, Sen. Hassan, Congresswoman Kuster, and Congressman Pappas.”

In fact, the state’s surplus is a result of record income from state revenue sources. As of May 2022, the Sununu administration had collected $406 million more than projected in the two-year state budget passed last year.

“We’ve managed our economy really well here. We have a large surplus here, and that allows us to move forward and make these investments to help individuals on the ratepayer level,” Sununu said.