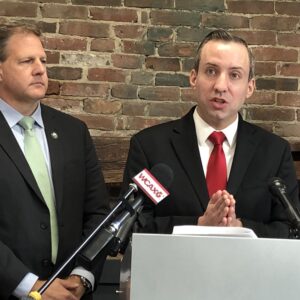 The Sununu administration has joined 24 state attorneys general opposing a new policy by the nation’s largest credit card companies to begin using a new transaction code to specifically identify purchases at gun stores. It is a move backed by anti-gun organizations like Everytown for Gun Safety but opposed by Second Amendment advocates who fear it will lead to more restrictions on gun owners.

“Categorizing the constitutionally protected right to purchase firearms unfairly singles out law-abiding merchants and consumers alike,” New Hampshire Attorney General John Formella and his fellow attorneys general wrote in a letter to American Express, Mastercard, and Visa. “Be advised that we will marshal the full scope of our lawful authority to protect our citizens and consumers from unlawful attempts to undermine their constitutional rights.

“We write to call on you to reverse your decision to comply with new standards made by the International Organization for Standardization (ISO) to create a separate merchant category code for the sale of firearms in America.”

New Hampshire is one of seven states that do not popularly elect their attorney general. Instead, the position is nominated by the governor and confirmed by the Executive Council.

Gun rights supporters tell NHJournal they are glad to see the Sununu administration speak out.

“This letter is clearly a shot across the bow that litigation will likely follow if credit card companies do not reverse course,” said Executive Councilor Dave Wheeler, who founded the New Hampshire Firearms Coalition. “Kudos to Attorney General Formella for standing up for New Hampshire citizens.”

“The electronic record created by credit card purchases already provides an avenue for criminal investigative authorities to subpoena records of individuals suspected of committing crimes.  The question at hand with the new Merchant Category Code is: Why are FFLs [federal firearms licensees] suddenly being treated differently than other merchants?

“At best, this move is meant to put added pressure on gun dealers, consistent with the anti-gun movement’s attempts at using corporate policy, regulatory authorities, and lawsuits to drive dealers out of business. At worst, this data is being collected so that, in the future, law-abiding individuals will suffer penalties or unjust scrutiny for simply exercising a constitutional right.” List said.

“These new merchant codes will help banks and financial institutions track suspicious and potentially illegal gun purchases,” Shannon Watts, founder of Moms Demand Action, said in a statement. “It takes all of us to tackle our gun violence epidemic which is why we’re grateful for Amalgamated Bank’s leadership in this effort and call for all other banks and financial institutions to follow suit.”

Moms Demand Action supports the expansion of gun control laws — which they call “gun safety” laws — including a ban on the sale of so-called “assault weapons.”

While the Attorney General’s Office is independent of the governor, most political observers believe Formella would not take such a public action without Gov. Chris Sununu’s support. The three-term governor has been endorsed by the NRA and has signed several pro-Second Amendment bills into law, including a 2017 law making New Hampshire a “constitutional carry” state. Earlier this year he signed a law barring state enforcement of federal firearms laws.

In the past, Democrats have made gun control a central part of their political campaigns. In the wake of the mass shooting at an elementary school in Uvalde, Texas, a Morning Consult poll in June found support for stricter gun laws at an all-time high.

But Sununu’s Democratic opponent, state Sen. Tom Sherman, rarely mentions the gun issue. On his campaign website’s “Priorities” page, for example, the word “gun” doesn’t appear a single time. In 2020, he received a zero rating from the NRA.

He has published an editorial, however, stating his opposition to Sununu’s gun policies. “Doing nothing is not an option, yet it’s the path that Gov. Chris Sununu has chosen time and time again. We cannot allow our leaders to continue to cave to their gun lobby donors instead of putting in place common-sense measures to protect our children, teachers, and police officers.”

Meanwhile, a new Granite State Poll, conducted by the University of New Hampshire Survey Center, finds Sununu with a 55-37 percent lead over Sherman.