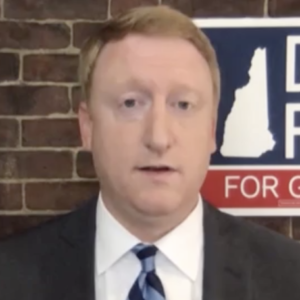 St. A’s Poll Finds Feltes Trailing Sununu. And Everyone Else, Too.

But that’s not the worst news for the would-be Democratic governor. His performance with voters is also trailing the other major Democratic candidates. In their head-to-head match-ups, every other N.H.Dem has about 50 percent (or more) of the vote. Feltes has just 35 percent, against Sununu’s 58 percent.

Part of Feltes’ challenge is that he’s still a relative unknown. More people have no opinion of him (40 percent) than feel favorable toward him (33 percent). And this is after more than $1 million in media spending on his behalf in the past few weeks.

Ah, but most of that money has been spent labeling Sununu “a Trump guy through and through.”

How well has that worked?

In a state where President Trump is at a -12 (44 percent approve, 56 percent disapprove), Sununu’s at a +37 (68/31 percent). After a month of ads designed to turn Sununu into Trump, the governor’s outperforming the president by 49 points.

Political pros aren’t impressed by the strategy. “The effort to link Gov. Sununu to President Trump is doomed to fail,” says veteran NHGOP strategist Jim Merrill. ” The Governor enjoys broad and significant public support because along with his impressive record of achievement, he has an optimistic, NH first brand that is un-Trumpian and unique to him.”

But is it just strategy? Some New Hampshire progressives are pointing out that their choice for governor, Executive Councilor Andru Volinsky, would likely be performing better than this — or at least wouldn’t be doing any worse. “Andy would be down 12 instead of 23,” a Volinsky supporter told NHJournal.

Democrats are reluctant to criticize their party’s nominee on the record, but several have told NHJournal that Feltes’ performance has been even worse than they expected.

“Unimpressive,” one N.H.Dem activist said. “There’s no other word for it.”

A North Country Democrat told NHJournal Feltes isn’t making a mark in that part of the state.

“Dan is not doing well in Coos because he has not been here.  He does not know us,” the Democrat added.

One-time gubernatorial candidate and outspoken progressive Arnie Arnesen says it’s unfair to put all the blame on the candidate.

“Feltes lacked name recognition when he announced. And when the pandemic hit with a vengeance, it forced grassroots campaigning to morph into Zoom and social media, which doesn’t work well for introducing yourself to an electorate that only has eyes and ears for the ‘Liar-in-Chief’ at the top of the ticket,” she told NHJournal.

“Meanwhile, Sununu is affable. He undermines education, he undermines investment, he refuses to protect workers, he avoids transparency (like Trump hides his tax returns) and he is clearly ethically challenged given his propensity to embrace no-bid contracts. Ahhh, but he does it with a smile.”

Republicans obviously don’t agree with all of Arnesen’s analysis. But Sununu’s performance — along with Feltes’ —has them smiling, too.