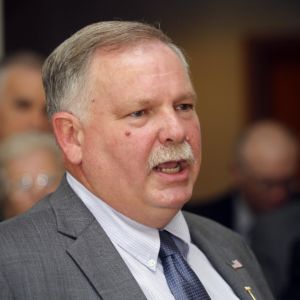 On Wednesday, Sununu issued a press release recommending Jasper apply to replace outgoing Agriculture Commissioner Lorraine Stuart Merrill, who has served in that position since 2007. Merrill announced in September she would retire at the end of the year, coinciding with the end of her second term.

Jasper issued a statement on Thursday to accept Sununu’s offer, saying while it was not a position he actively sought, it was the only position he would consider resigning his speakership for.

“These are crucial times for agriculture in our state and we must continue to do all we can to protect agriculture, commerce, consumers and the environment as we move ahead,” Jasper wrote. “Agriculture has been in my blood, and a part of my life, since childhood when I worked in the family poultry business. I have maintained a strong relationship with the agricultural community in the state through my adult life and am a proud Life Member of the Future Farmers of America Alumni Association. I look forward to bringing my experience and background in agriculture to the position of commissioner if I am fortunate enough to be the final candidate and am approved by the Governor and Executive Council.”

Jasper’s background is staked in agriculture, beginning with a childhood raised on a poultry farm in Hudson. The farm closed when Jasper was in his early teens but he reopened it in his 20s on a smaller scale, working as a poultry farmer prior to his career in politics.

Maria VanderWoude is the Executive Director of the Granite State Association of Future Farmers of America (FFA). VanderWoude is also the sister of Speaker Jasper. In an interview with NH Journal, VanderWoude said Jasper has been involved with FFA for over 40 years dating back to his early high school years. He attended Alvirne High School, where he was a “natural fit” for the youth leadership development organization.

“[Jasper] became very passionate about FFA because he learned so many leadership skills in it, that’s where he started his career in public speaking,” VanderWoude said. “He developed his love and abilities as a public speaker as well as in parliamentary law. One of the contests in FFA was in parliamentary procedure and he was very much into that. He learned all kinds of leadership skills like communication and teamwork.”

The organization has 12 chapters around the state servicing approximately 500 high school students, who may not all pursue a career in agriculture but are trained with leadership skills. Jasper continues to attend the annual FFA state convention as both a speaker and judge for a variety of career development contests ranging from poultry judging, forestry and veterinary science to public speaking and parliamentary law.

Jasper was awarded the status of Life Member of the FFA Alumni Association and an honorary FFA degree in appreciation for the support he has provided during his time in the legislature.

Debbi Cox, state coordinator of New Hampshire Agriculture in the Classroom, a non-profit educational organization, told NH Journal a potential area of improvement for the Granite State’s agricultural sector should focus on advancing education efforts. Cox said a majority of residents are descendants of farmers but don’t realize the connection to where food and fibers are produced today.

Cox also cited a growing global population as one of many reasons to invest in agriculture education. She said students who are provided an agriculture education can “develop solutions for producing more food and fiber on less land.” According to Cox, the organization received significant support from Merrill to promote education, raise public awareness, and increase state funding, which she hopes will continue with the next commissioner.

“Speaker Jasper has deep roots in agriculture, as a former FFA member, he has experienced agricultural education first hand,” Cox said. “I’m confident he will do what he can to strengthen our efforts. We just need more people to listen. His support of agriculture as the Speaker will certainly be missed.”

He said the next commissioner must be a strong advocate for the New Hampshire’s agriculture by dealing with both the state government and federal agencies, supporting the growth of a local food economy and maintaining open communication established by the previous commissioners.

“Speaker Jasper certainly meets our stated policy requirements for the job with his family background and experience in production agriculture as a poultry farmer,” Johnson said. “He also has a record of strong support for New Hampshire agriculture as both a Representative and as House Speaker. He has a good understanding of the issues farmers face and we have enjoyed a good working relationship with him.”