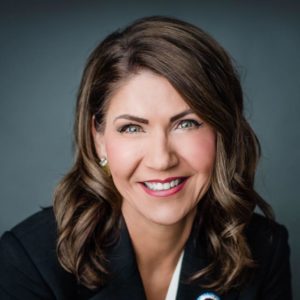 South Dakota Gov. Kristi Noem may be making her first-ever trip to New Hampshire this week, but her message will be very familiar in the Live Free or Die state.

“My message is one of freedom, of defending our Constitution, and of law and order,” Noem told NHJournal. “And we need to do everything we can to get President Trump across the finish line this November.”

She’ll be speaking at an NHGOP event in Nashua and an event for the Trump NH campaign at their headquarters in Manchester on Thursday.

Noem, a former member of Congress and the first woman governor of South Dakota, is a rising star in the GOP and a potential 2024 POTUS candidate. She’s also a steadfast supporter of President Trump, and the Granite State is one of several stops she’s making this campaign season to promote the president’s record.

“No president has done more to protect our fundamental rights than Donald Trump,” Noem said, listing his tax policy and pro-energy economics among his list of achievements. She’s also very pleased by his pick of Judge Amy Coney Barrett for the Supreme Court.

“I think she’s fantastic,” Noem said Wednesday morning before the final day of Senate Judiciary Committee confirmation hearings began. “I didn’t really know much about her until she appeared on President Trump’s list, but her record and her performance — she’s so impressive.”

One of the president’s weakest areas is the public’s view of his handling of the COVID-19 pandemic. Noem says that’s unfair.

“The facts have been buried,” when it comes to Trump’s record, Noem said. “As a governor, I can tell you President Trump got my back during COVID-19.” And she has little patience for Democratic governors criticizing the president’s performance.

“I was on those phone calls between the president and the governors. I listened to thousands and thousands of hours as they sang his praises,” Noem said. “Any state, no matter how big or small, would say they needed supplies, and within 12 hours they’d have it. What you’re hearing now is all political.”

Gov. Noem’s approach to tackling COVID-19 in South Dakota is under attack as the virus surges in the northern Midwest. North Dakota, South Dakota and Montana have the highest positive test rates over the past seven days in the country.

At the same time, South Dakota has one of the lowest COVID-19 death rates in the nation, ranked number 17, just ahead of New Hampshire. And, like New Hampshire, there’s no statewide mask mandate and no Massachusetts-style restrictions on business.

“We made different decisions than some other states,” Noem said. “We did all the smart things other governors did. We were aggressive in getting out information to our population so they could protect themselves. We received guidance from epidemiologists and health experts. But I also consulted with my general counsel. I wanted to know the limited of my constitutional authority.

Noem noted that New York Gov. Chris Cuomo’s approach led to the policy of sending COVID-positive patients back to nursing homes, with disastrous outcomes. New York has the second-highest death toll in the country, more than 500 percent higher, per capita, than South Dakota or New Hampshire.

“What I’ve noticed is that when leaders allow fear to control them, when they get emotional and scared — that’s when they overstepped and made the wrong decision,” Noem said.

Noem is the latest in a string of potential 2024 Republican candidates to make stops in the First in the Nation primary state.

Arkansas Sen. Tom Cotton campaigned for NHGOP candidates over the summer, and he’ll be back for a Corky Messner event on October 19. Former U.N. Ambassador and South Carolina Gov. Nikki Haley did some fundraising for the House GOP and NH-01 congressional candidate Matt Mowers a few weeks ago.

And South Carolina Sen. Tim Scott will be in New Hampshire on October 22 for a Gov. Chris Sununu fundraiser.

So is there a Noem/Sununu 2024 ticket on the horizon?

“I’ve been to a lot of states lately, campaigning for President Trump. I’m happy to go wherever he sends me,” Noem said. And though it’s her first visit, should we expect to see her again after November?

“I would love to visit New Hampshire again soon.”