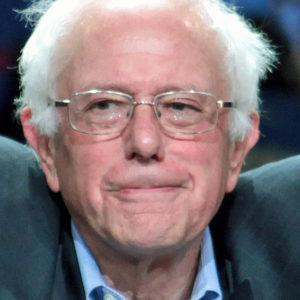 ‘Somebody’s Gonna Have to Beat His A**:’ Reluctant Democrats Acknowledge Sanders’ Front-Runner Status

Is it time to drop the “F-bomb” on Bernie Sanders’ campaign:

New numbers from Emerson Polling put the Vermont Socialist-turned-Democrat atop the long list of 2020 Democratic hopefuls. Most significantly, Sanders has a five-point lead over former Vice President Joe Biden who has otherwise dominated the early polls thus far. In fact, this is the first poll of the year in the RealClearPolitics average of polls to find Sanders in first place. 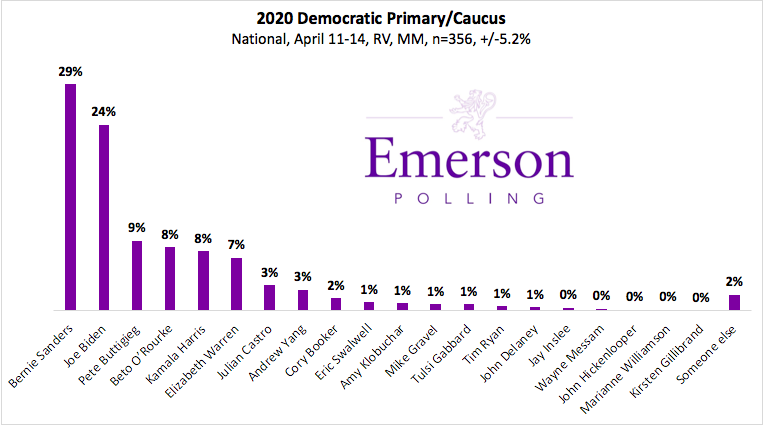 Is a single poll sufficient to move Sanders into the frontrunner spot? Particularly when the next day two new polls —Morning Consult and the University of Southern California– both had Biden back on top?  Some analysts say yes, based on Bernie’s fundamental strengths and the Democratic Party’s weakened ability to deny an anti-establishment candidate like him the nomination.

Some liberal observers have viewed Bernie as the front-runner for months.

Back in February, Edward-Isaac Dovere at The Atlantic wrote, “He’s a 77-year-old socialist who’s abrasive when he’s in a good mood, and who’s still blamed by many Democrats for Hillary Clinton losing to Donald Trump. But go ahead, try to argue that Bernie Sanders isn’t the front-runner in the 2020 Democratic race right now.”

And way back in July 2017, just six months after Donald Trump was sworn in, progressive pundit Matt Yglesias at the leftwing Vox website was already declaring Bernie Sanders the candidate to beat.

“Bernie Sanders is, by some measures the most popular politician in America, by far the Democrats’ most in-demand public speaker, and the most prolific grassroots fundraiser in American history,” Yglesias wrote. “Make no mistake: Sanders is the real 2020 frontrunner.”

Establishment Democrats are more than happy to concede that Sanders is the front-runner “among the declared candidates” — a list that notably doesn’t include Joe Biden. This puts the former vice president in the role of the Great Moderate Hope, which no doubt annoys candidates like Rep. Tim Ryan (D-OH) and Sen. Amy Klobuchar (D-MN) who believe they are viable centrist alternatives. It also reveals just how much some in the Democratic establishment fear a Sanders nomination, believing they need a centrist savior to rescue their party.

Part of that fear is being fueled by media coverage of the new 2020 Democratic primary rules, specifically that delegates will be awarded proportionately to every candidate who breaks the 15 percent barrier, at either the state or congressional district level. This means Sanders–who got a stunning 13 million votes just four years ago–is all but certain to win some delegates in every primary contest. And given that he won 23 states outright in a head-to-head matchup with Hillary, it’s possible he could dominate the delegate process in a divided, multi-candidate field.

As former Obama official turned CNN pundit Van Jones recently reminded his party, “The guy got 47 percent of the vote against the entire Clinton/Obama machine in a year that Hillary Clinton should have had a romp… People continued to underestimate the insurgency in our own party.”

So is Bernie just having a good couple of months in the early going, or is he a frontrunner other Democrats will have to find a way to defeat?

“Definitely the frontrunner,” says David Paleologos, director of the Suffolk University Political Research Center. “He’s got the name recognition, money, and campaign infrastructure in all the key caucus/primary states. And he’s the policy pioneer other candidates are copying.”

A Democratic activist who spoke to InsideSources off the record was more direct:

“Sanders isn’t going to fade away or run out of gas. If we don’t want him to be our nominee, somebody’s going to have to beat his a**.”

Real Clear Politics co-founder Tom Bevan agrees. “Just look at the number of donors he had: 525,000. Nobody else was even close. He’s got the money and support to go a long way. So your source is right: somebody is going to have to ‘beat his a**,’” Bevan said.

“That being said, I still think the race is wide open. The Democratic base is restless and unpredictable right now. Also, the African-American vote remains somewhat of a sticking point for Bernie. Then again, with so many candidates in the race, black voters could be divided among several candidates which, again, benefits Sanders.”

Meanwhile, a new Change Research poll of delegate-rich California has Sanders in the lead with 22 percent, narrowly edging past Biden (21 percent) and home state Sen. Kamala Harris (19 percent).  Thanks to the new calendar, California’s early voting starts before the first votes in New Hampshire are cast, which means early strength will count even more in the 2020 cycle.

As Obama’s 2012 finance director Rufus Gifford said of Mr. Sanders in the New York Times, “I feel like everything we are doing is playing into his hands.”