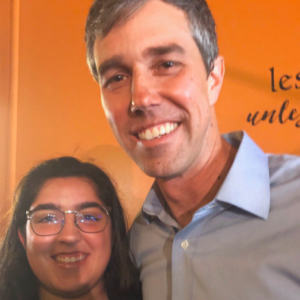 Beto O'Rourke greets a supporter at a campaign event in Iowa.
News

The avalanche of media coverage — some would say fawning media coverage— of Texas congressman Beto O’Rourke’s official entrance into the 2020 presidential race has many Americans asking about his nickname and what it says about the candidate.

Answer: Quite a lot.

Robert Francis (Beto) O’Rourke is the son of popular El Paso politician Patrick Francis O’Rourke and Melissa Martha Williams. As a fourth-generation Irish American, Beto has more in common ethnically with Joe Biden than he does his 2018 U.S. Senate candidate Ted (AKA “Rafael Edward”) Cruz.

O’Rourke has never claimed Hispanic heritage. Instead, O’Rourke describes himself as a “son of the border” who grew up El Paso, a community steeped in Hispanic culture.  He denies that he adopted the nickname “Beto” as a political trick, and he’s released a photo of himself as a kid wearing a sweater with “Beto” stitched across the front.

And it’s true: O’Rourke didn’t pick his nickname name for political purposes. His Dad did.

The Dallas Morning News reported it this way:

“In the backdrop of the city’s multicultural community, his father, Pat O’Rourke, a consummate politician, once explained why he nicknamed his son Beto: Nicknames are common in Mexico and along the border, and if he ever ran for office in El Paso, the odds of being elected in this mostly Mexican-American city were far greater with a name like Beto than Robert Francis O’Rourke.”

Pat O’Rourke was a popular local politician who served as both a County Commissioner and County Judge.  When Beto was told about his father’s explanation for his Hispanic nickname, he told the Dallas paper “I believe it, I believe it. He was farsighted that way.”

And after abandoning the name for a few years while attending a private prep school in Virginia and then Columbia University in NYC, Beto was farsighted enough to pick it back up when he came home to El Paso.

And it drives his political opponents crazy.

“I still hear from Latinos who think that Beto’s Hispanic,” says conservative Texas radio host Chris Salcedo, who calls Beto’s use of the name “cultural appropriation.”

“I find it offensive,” he tells InsideSources. “His father gave it to him for one reason—because it resonates well with Hispanics. He’s one of the elites who believes he’s entitled to rule,” Salcedo says.

Political columnist and commentator Ruben Navarette also still runs into members of the Latino community confused about Beto’s ethnicity. In fact, Navarette confesses, he was once one of them.

“Long before he entered the race against Ted Cruz, I was talking to a Texas lawmaker who was telling me all about Beto O’Rourke, and I said ‘Oh, he’s Latino, right?’ And he said ‘No, no, no—His real name is Robert Francis!’ And I said ‘Huh?’”

According to Navarette, despite the national attention “there are still Latinos, Mexican Americans—even in Texas and the southwest — who think Beto’s Latino.”

“Why wouldn’t he be? After all, in the era of Trump, why would a guy go around saying he’s Mexican if he doesn’t have to?”

Navarette says Beto represents the affirmative-action ideal for white, suburban progressives who want to feel good about supporting diversity while, in fact, voting for someone just like themselves.

“His stab at cultural appropriation also allows arrogant white liberals to feel as if they’re progressive enough to vote for a Latino because they know in their heart that it’s a safe choice, since they’re really just voting for one of their own,” Navarette recently wrote for the Washington Post.

He also mocks the media’s obsession with O’Rourke in a field full of actual ethnically-diverse candidates like former HUD Secretary Julian Castro and California’s Sen. Kamala Harris. “He’s an affluent white guy whose father-in-law is a billionaire. The press could never cover him the way they are if his name weren’t ‘Beto.’ Pat O’Rourke was a genius,” Navarette says.

Longtime New Hampshire immigration activist Eva Castillo says the Beto nickname doesn’t bother her. “I get a kick out of it.  He chooses to call himself Beto, I see it as a friendly gesture,” she tells InsideSources. In New Hampshire, the Hispanic population is less than 4 percent of the vote.  Castillo still thinks O’Rourke has a chance to do well in the First In The Nation primary, but the names she hears most often in the community are Sen. Elizabeth Warren and —no surprise — Julian Castro.

And while she bears Beto no ill will, Castillo sees the same dismissive attitude toward Castro that Navarette has noted. “The media dismiss Julian–why?” she asks. “One man calls himself ‘Beto’ who has nothing whatsoever to do with the Latino community and he gets all this attention, but a successful Hispanic leader gets overlooked. In this society, I have to believe it has something to do with race,” Castillo says.

O’Rourke currently has no visits scheduled for the Granite State, though his supporters believe that will change soon.  Meanwhile, Navarette says, Beto will benefit from playing both sides of the identity-politics field.

“Progressives are obsessed with race, but at the same time, white people are endlessly fascinated by white people,” Navarette says. “With Beto, they can have their flan and eat it, too.”