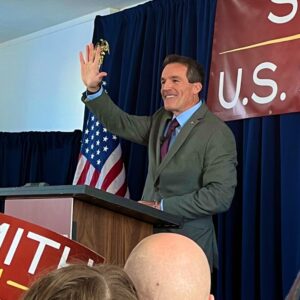 For the Kevin Smith campaign, all politics is local — even when you’re running for U.S. Senate.

“Washington is failing us,” Smith told a crowd of supporters on Saturday. “We need new leaders — imbued with common sense,  decency, and compassion — to replace the distant, disinterested and dishonest career politicians in Washington, D.C.”

Hardly subtle. But will it be effective enough to get Smith through what is almost certain to be a tough GOP primary battle with state Senate President Chuck Morse (D-Salem) and retired Gen. Don Bolduc?

Smith took the opportunity to address the “Town Manager to U.S. Senate?” issue by touting Londonderry’s growth on his watch, as well as his work on the Pease Development Authority.

“As the chair of the Pease Development Authority, I’ve overseen the Manchester-Boston regional airport — which we all know is in Londonderry — the Portsmouth International Airport, as well as the Ports and Harbors in Portsmouth, which are now the largest economic engines in New Hampshire,” Smith said.

Still, the 44-year-old town manager isn’t going to win a “political resume” primary against a veteran lawmaker like Morse. Instead, he previewed his general-election message against first-term incumbent Sen. Maggie Hassan, giving GOP voters a glimpse of the campaign they will see if he is their nominee.

“I’ve seen it firsthand in my role as town manager over the last six years – Maggie Hassan has been an absent senator. More comfortable holed up in Washington — we rarely see her — or even hear from her — around the Granite State,” Smith said. “You could say she has socially distanced herself from the people of New Hampshire.

He then laid out a series of issues, from fighting inflation to keeping classrooms open to securing the border, each tagged with the phrase “Maggie Hasn’t. I will.”

What Hassan has done, however, is raise a massive amount of campaign cash, something Smith has yet to show he can do. And GOP insiders in both Washington and New Hampshire tell NHJournal that’s a critical test Smith must pass if he hopes to get the support he will need from the National Republican Senatorial Committee (NRSC) to win what is likely to be the most expensive political campaign in Granite State history.

Smith’s name ID in the latest St. Anselm College Survey Center poll was by far the lowest of the three candidates at just 17 percent. The rest of those surveyed either had no opinion or said they didn’t recognize the name. Morse had 30 percent name ID while Bolduc — who ran in a GOP U.S. Senate primary in 2020 — was recognized by 46 percent of respondents (though he was underwater by -6.)

Interestingly, Hassan only had 42 percent support against Smith in the polls head-to-head question, yet another reminder the Democrat incumbent who’s embraced progressive policies like the federal takeover of elections and ending the filibuster is underwater with the Granite State’s generally moderate electorate.

That may explain why Democrats are already targeting an unknown candidate like Smith, sending protesters to Saturday’s announcement to highlight his pro-life politics. Democrats also filed a nuisance lawsuit over anti-Hassan tweets sent by Smith during business hours while still employed as Londonderry town manager.

According to reporting by the Union-Leader, one of the Democrat complainants said the tweets “would clearly be in violation of the Hatch Act.”

And a Democratic Party “tracker” — a staffer sent to watch and record an opponent’s campaign events — was spotted at Smith’s announcement sending text messages to Hassan’s campaign manager Aaron Jacobs.

Smith says he is undeterred.

“I enter the fray knowing full well this campaign won’t be easy,” Smith said Saturday. “I mean — who am I, right?”

The race is on to answer that question before September.