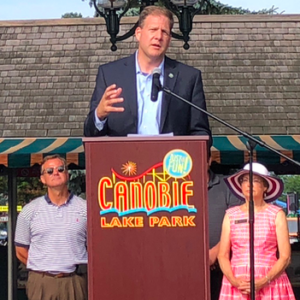 Should Gov. Sununu Spend A Week Living On Minimum Wage?

Progressives at the Raise Up NH Coalition are calling on Gov. Sununu to live on minimum wage for one week “to truly experience why it is critical to raise the state’s minimum wage,” they said in a statement.

“The passage of SB 10 brings New Hampshire one step closer to the wages of our neighboring states and makes New Hampshire businesses more competitive employers,” Senate President, and prime sponsor of the bill, Donna Soucy (D-Manchester) said. The effort is supported by groups like Granite State Progress and — not surprisingly, given the number of union agreements that have pay provisions linked to the minimum wage–the New Hampshire AFL-CIO.

But why does Raise Up NH want Gov. Sununu to live at the minimum wage, given that virtually nobody else does–particularly in New Hampshire?

“Our position is that it is unethical and immoral to ask people to survive on a wage that can’t possibly support them,” Keith McCrea of Raise Up NH Coalition told NHJournal. “The goal is for Gov. Sununu to see that it’s all but impossible to live on the minimum wage–even for just a week. It doesn’t matter that only 12,000 people or so have minimum wage jobs.”

“He’s right about the 12,000 people,” says Drew Cline, Executive Director of the Josiah Bartlett Center. “That’s why he’s wrong about everything else.”

According to data from the Burea of Labor Statistics, of the 391,000 hourly or salaried workers in the Granite State, fewer than 12,000 work at or below the minimum wage. And despite Raise Up NH Coalition’s claims, across the U.S., nearly half (47 percent) of minimum wage workers are between the ages of 16-24 years old.

“Forget minimum wages, I would challenge him to live on zero dollars a week–which is what you get paid if you’re a low-skill worker and you can’t get a job,” Cline told NHJournal. “People who work for minimum wage are often entry-level workers. A minimum wage hike raises the lowest rung on the economic ladder for workers with the fewest skills.”

Research published by the left-leaning Brookings Institute in 2014 found that “an increase in the minimum wage tends to have a ‘ripple effect’ on other workers earning wages near that threshold.” That effect reaches five times as many workers as the minimum wage hike itself.

“Right now, New Hampshire is an island—our minimum wage is at least $3 below Maine, Vermont, and Massachusetts and is the lowest in all of New England,” Soucy said today, and she’s right. However, New Hampshire also has a higher median household income than all those states except Massachusetts, and the fifth highest in the nation.

The real employment wage issue isn’t the minimum wage, it’s New Hampshire businesses struggling to find qualified workers to fill job openings that pay much more. Which is why the argument that the Granite State needs a higher minimum wage makes no sense. A higher wage job is waiting right now. The workers just need to get the skills.

What McCrea’s organization is really lobbying for is a so-called “living wage,” which separates the value of labor or skills from the price.  This is widely viewed as a job-killing strategy, particularly for low-skill workers.

But, as McCrea points out, it is politically popular.  “Polling shows this is an overwhelmingly popular measure,” he tells NHJournal, “including 47 percent of independents who say they would be less likely to vote for Sununu if he vetoes this bill.”

McCrea insists that calling for Sununu to live on the minimum wage is “not a political ploy,” however he acknowledges that supporters of the bill are trying to apply pressure.

“I’ve been working on this for six years,” he told NHJournal.

Interestingly, during those same six years, the number of workers earning the federal minimum wage in New Hampshire has fallen and average hourly wages/household incomes have risen–without a minimum-wage hike mandate.