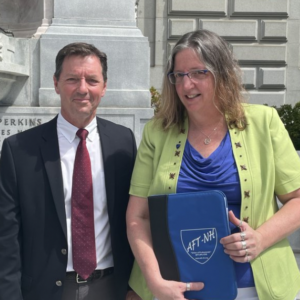 Are business owners who accepted PPP aid during the COVID-19 lockdowns the same as college students who applied for federal loans to attend Dartmouth or UNH?

“Who has to pay it off?” he asked. “It’s the farmers. It’s the construction workers. It’s the folks whose kids didn’t go to college. It’s insulting. Everyone should be furious at this. More tax dollars flooding into the economy, fueling inflation.”

While the price tag for Biden’s executive action is usually quoted as $500 billion for a one-time debt bailout, the Penn-Wharton analysis says the total cost could eventually be $1 trillion.

“It’s arbitrarily picking a group of individuals, and we’re going to arbitrarily just cancel their debt with a stroke of a pen, which, again, not even going through Congress. That’s fairly illegal. It adds hundreds of billions of dollars at a time when we’re trying to bring inflation under control. That’s exacerbating the inflationary crisis,” Sununu said.

Sherman campaign spokesperson Kelly Roberts called it “‘inherently unfair’ for Chris Sununu to accept debt relief for his wealthy family’s company and tell Granite Staters they should just make do while monthly bills like energy costs soar. From signing New Hampshire’s first abortion ban to repeatedly caving to fossil fuel interests and leaving New Hampshire with some of the highest energy rates in the country, it’s clear Chris Sununu can only be trusted to look out for Chris Sununu.”

(Sununu resigned as CEO of Waterville Valley Resort and relinquished his position on the Board of Directors in December 2016.)

It was not just the Sherman campaign. Progressive state Rep. David Meuse (D-Portsmouth) also went on the attack.

“Perhaps the hypocrisy wouldn’t be so striking if it weren’t so blatant,” Meuse wrote in an op-ed. “Evidently, it’s fine to heap scorn on people struggling with student loan debt. But when it comes to forgiving taxpayer-funded loans accepted by the Sununu family’s business interests, ‘that’s different.'”

The White House is on board, too. The Biden team used its Twitter feed to post the amount of PPP aid GOP members of Congress received for their businesses.

Are Democrats arguing Congress’ PPP program was a form of charity, as opposed to the government addressing the consequences of its lockdown mandates? Do Democrats believe Granite State businesses who accepted PPP did something ethically questionable?

Neither Sherman nor Meuse responded to repeated NHJournal inquiries.

Kelly’s family owns a group of car dealerships across western Pennsylvania. Gov. Tom Wolf (D-Pa.) ordered all car dealerships closed during the pandemic lockdown. Congress passed PPP for businesses like Kelly’s to fund their employees’ paychecks and healthcare during the economic crisis government created when it ordered the majority of Americans to stay home or close their businesses.

“A Democrat governor declared my family’s business non-essential and shut our doors,” Kelly said in response to the White House. “This money saved over 160 essential jobs in Western Pennsylvania during the pandemic. PPP loans are designed to be forgiven. Student loans are not. Big difference!”

In New Hampshire, nearly 24,000 PPP loans were issued in response to the COVID-19 lockdowns, the vast majority going to small businesses.

“Every single restaurant/entertainment venue/ etc. would have been out of business without PPP loans. Our restaurants were shut down by the government. It wasn’t my choice. I either had to take the PPP loans or go out of business after 35 years and file bankruptcy,” Boucher said. “Going to college is an individual decision. It’s not forced on anyone, nor were the loans they took.