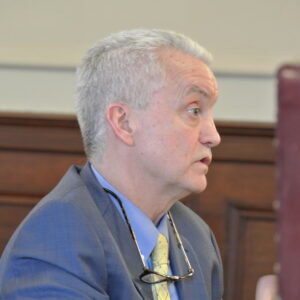 Shaughnessy: If I Get Judge’s Gig, I’m Bailing as Bedford Moderator

Less than 24 hours after winning the town moderator’s position in the Bedford Town election, Brian Shaughnessy is already looking for the exit.

During the Executive Council hearing on his nomination to become a circuit court judge, Shaughnessy said if he gets the judge’s job, he plans to quit his Bedford position.

“Should we choose to make you a judge, do you intend to resign as moderator?” asked Councilor Dave Wheeler.

Yes, said Shaughnessy, and he told the councilors he had already looked into the process of filling the post if he leaves the moderator’s position. It was not because of any concerns about a conflict of interest. “I don’t think there’s any inherent conflict with having a judge participating in the election process,” Shaughnessy said. It’s just that he doesn’t want to be Town Moderator.

“I didn’t want this job. I didn’t want to be the moderator,” Shaughnessy said just one day after being elected to the post. “I already did my time,” a reference to the fact Shaughnessy has previously served in the position.

“I would happily step down and have the supervisors do their job and get somebody,” Shaughnessy said, adding: “Had I known my judicial nomination was still there, I never would have put my name in [for moderator].”

The feeling may be somewhat mutual. Shaughnessy ran unopposed on the ballot, though a write-in candidate, Hanan Wiseman, received more than 650 votes. Out of 5,133 voters, nearly 2,000 voters either declined to cast a vote in the town moderator race or wrote someone in, town officials said.