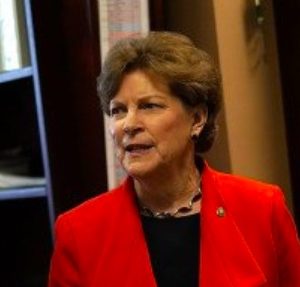 Senator Jeanne Shaheen is endorsing the Biden administration’s decision to impose sanctions on the owner of the Nord Stream 2 pipeline in the wake of Russia’s invasion of Ukraine. It’s a reversal for both the Biden White House and the New Hampshire Senator.

“Today, I have directed my administration to impose sanctions on Nord Stream 2 AG and its corporate officers,” Biden said. “These steps are another piece of our initial tranche of sanctions in response to Russia’s actions in Ukraine.”

“@POTUS is making the right call,” Shaheen tweeted on Wednesday. “I’ve long opposed NS2, which is why I wrote the bipartisan sanctions law to stop it. Every diplomatic lever must be pulled to punish Putin for violating Ukraine’s sovereignty & threatening Europe’s security.”

But just weeks ago, Biden was lobbying to kill a Senate bill imposing sanctions on the same pipeline. And one of his key allies in the Senate was Jeanne Shaheen. According to Roll Call magazine, Shaheen’s argument was that letting Putin have the Nord Stream 2 pipeline would make it less likely he would invade, an argument that appears embarrassingly wrong-headed in hindsight.

“I have been a strong and long-standing opponent of Nord Stream 2 … but right now, we’re in a different place on this,” Shaheen said in January. “[It] is coming at a time when the administration is exhausting every single diplomatic avenue to deter Putin from further violating Ukraine’s territorial integrity.”

In the end, New Hampshire’s senior Senator couldn’t prevent a bipartisan majority of her colleagues from backing the bill — including her fellow Granite Stater Sen. Maggie Hassan. But Shaheen was part of a successful Democratic filibuster using the Senate’s rules to kill the bill, despite 55 votes in favor.

Shaheen also voted in January to kill the filibuster rule.

Sen. Ben Sasse, R-Neb., who serves on the Intelligence and Finance committees, called Biden’s newly-announced sanctions “too little, too late.”

“We need to get the Ukrainians more weapons. We should be doing gun runs around the clock to arm the Ukrainian people to the teeth,” Sasse said. “Our goal should be pretty simple: Help the Ukrainian resistance hold on for as long as possible. Make Putin regret his flagrant disregard for the rule of law.”