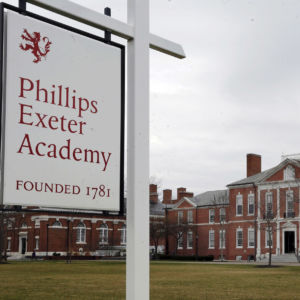 FILE - This April 11, 2016 photo shows a portion of the prestigious Phillips Exeter Academy campus in Exeter, N.H. Two former teachers at the academy acknowledged sexual misconduct, and a former admissions officer pleaded not guilty to sexual abuse. It was one of the state's top stories in 2016. (AP Photo/Jim Cole, File)
News

According to a new report from The New York Times, police sought to arrest two deans at Phillips Exeter Academy, an elite private boarding school, for failing “to report the alleged sexual assault of a student to the authorities.” But police were overruled by prosecutors.

The deans, Arthur Cosgrove and Melissa Mischke, were not removed from their positions or arrested for violating the state’s mandatory reporting law.

In October 2015, two female students approached Cosgrove and Mischke with claims they were sexually assaulted by a male student over the age of 18 in the campus church’s basement. This complaint was not addressed with sufficient punishment according to one of the accusers, who requested a follow up meeting with Cosgrove in April 2016.

The female student subsequently went to the police after the spring meeting and misdemeanor assault charges were filed against Chukwudi Ikpeazu in June 2016.

In September, the academy agreed to a re-commitment of its obligations to report suspected abuse to the state as well as the Exeter Police Department.

A financial update from September also found the academy spent more than $5 million in legal fees to handle accusations of sexual misconduct. The total, which includes the cost of hiring the law firm Holland & Knight to lead an investigation into sexual misconduct allegations, was an increase of $3 million compared to the 2016 fiscal year.

Phillips Exeter Academy dealt with similar public scrutiny last spring after The Boston Globe reported on the institution’s cover up of sexual abuse by a male instructor towards female students over the past three decades.

In March 2016, former teacher Rick Schubart was publicly accused of having improper sexual relationships with students dating back to 1977.

The Globe report detailed how Schubart was the subject of an official complaint in November 2011 and abruptly resigned while still retaining an emeritus status. It was not until a second allegation of sexual misconduct emerged in 2015 that Schubart lost his academic title and was barred from campus.

Students, parents, and alumni, however, were not informed of the events, citing privacy concerns for the victims as the reason for the lack of notice.

The scandal became an issue in the 2016 U.S. Senate campaign as then-Gov. Maggie Hassan confronted questions over her husband’s role as headmaster at the school.

Thomas Hassan, former First Gentleman, served as principal of Phillips Exeter from 2009 until retiring in June 2015. Hassan said he was retiring in order to “focus more time on his family and his wife’s political career.” Prior to that, Hassan had worked at Phillips Exeter in various administrative positions since 1989 and lived on the campus while working there, including during the period of time when the allegations against Schubart were made.

The Association of Boarding Schools censured Thomas Hassan in April 2016 for failing to inform it of the allegations against Schubart, as well as his forced retirement, prior to bestowing him the Ruzicka Compass Premier Leadership Award in 2012.

Schubart donated to Hassan’s successful gubernatorial campaign in 2012 and was named to her steering committee even after his resignation in 2011. Last year, Hassan’s Senate press secretary told the New Hampshire Union Leader the donations to the gubernatorial campaign were redirected to HAVEN, a charity program offered by the New Hampshire Coalition Against Domestic and Sexual Violence

Sen. Hassan did not return a request for comment on this story.

In a public meeting with reporters in April 2016, Hassan addressed questions raised about Schubart’s role with the gubernatorial campaign.

“What I want to be clear about is when [Rick] Schubart moved off campus and announced his retirement, I certainly sensed it was unusual, and I certainly sensed something was wrong,” then-Gov. Hassan said. “In retrospect, I think I should have thought about if he was on a campaign list somewhere and acted to remove him. I didn’t and I apologize for that.”

The connection between the Hassans and the scandal at Exeter was a major point of contention during last year’s Senate campaign against incumbent Republican Sen. Kelly Ayotte. A NH Journal/InsideSources poll from June 2016, found a majority of voters, 52.4 percent, claimed the scandal made them less likely to support Hassan, while 32.4 percent claimed it made no difference, and 14.1 percent claimed it actually made them more likely to support Hassan.

Phillips Exeter is one of several educational institutions in New Hampshire dealing with the repercussions of sex abuse scandals. Earlier this month, New Hampshire Attorney General Gordon MacDonald announced his office was investigating three psychology professors at Dartmouth College who were accused of sexual misconduct with female students.

St. Paul’s School, another private boarding school, released a report earlier this month with detailed allegations of sexual misconduct against five faculty and staff members ranging from 1956 to 2009. The school was at the center of controversy in 2015 when Owen Laberie, a senior, was accused of assaulting a freshman girl as part of a school ritual among students. Laberie, was convicted of misdemeanor counts involving sex with a minor.

By Don Bolduc on November 19, 2022
Running as the Republican nominee for United State Senate was the honor of a lifetime.…
Read More
[IS] Opinions

POWELL: A Five-Step Plan for a Trump 2024 Victory

By Dennis M. Powell on November 18, 2022
Former president Donald Trump’s announcement of a 2024 White House run was predictable, even if…
Read More