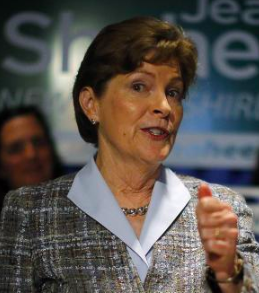 Calling the situation a “crisis at the border,” New Hampshire Jeanne Shaheen announced her support for a physical barrier to help control the flow of illegal immigrants into the U.S.  Specifically, Shaheen backs funding for “700 miles of border fencing,” relating it directly to the wave of 60,000 people–many of them women and children– being apprehended by the Border Patrol every month.

“The crisis at the border…demonstrated exactly why we must address this problem now,” Sen. Shaheen said.

If you’re stunned to hear Sen. Shaheen echoing President Trump’s position on a border barrier, you can read it for yourself, right here on her website.

Illegal immigration and border security were a hotly-debated issue during Sen. Shaheen’s 2014 campaign battle with Republican Scott Brown.  During that campaign, Shaheen repeatedly called for border fencing, increased spending on border patrol and ICE, and for the deportation of families and children who did not qualify for asylum under U.S. law.  The question is whether she still supports these positions and, therefore, could be part of a compromise with the Trump administration to end the government shutdown.

During the period Sen. Shaheen described as a “crisis,” from March through June of 2014, around 60,000 people were apprehended each month at America’s southwest border.  In December of 2018,  U.S. border agents apprehended 60,782 people, including a record number of “family units.”

Sen. Shaheen repeatedly called 60,000 illegal immigrant families at the border a “crisis” during her 2014 campaign. So why isn’t it a “crisis” today?

However, she isn’t the only New Hampshire politician with a difficult to follow record on walls and borders. As recently as May, her fellow Democratic Sen. Maggie Hassan expressed support for a “physical barrier” along parts of the U.S./Mexico border.

As has been repeatedly noted, 36 Senate Democrats who supported border fencing and deportation policies in 2013 are now refusing to even discuss a deal with President Trump over a $4 billion boost in border funding. Many are denouncing Trump’s approach as “immoral” and “racist,” despite the fact that it was their own just a few years ago.

“If border walls are immortal then why did you support them to begin with?” asks Andrew R. Arthur, Resident Fellow in Law and Policy at the Center for Immigration Studies. “This is all about politics. Democrats want to deny Trump a victory on his key issue.”

Democrats argue that they only supported these enforcement provisions are part of a bigger bargain to give amnesty to illegal immigrants already in the U.S. and, since Trump isn’t offering any deal, there’s no hypocrisy. But that’s an argument for not voting for a stand-alone enforcement effort, it doesn’t explain why they’re condemning physical barriers as immoral or unjust.

Sen. Shaheen’s outspoken enthusiasm for border fencing in the recent past makes it hard not to suspect her position today is all about politics.