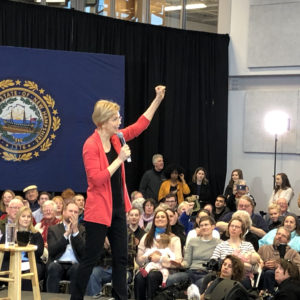 Nothing is certain but death and taxes, and for New Hampshire Democrats, tax hikes have been political death.

So, what will they make of Sen. Elizabeth Warren’s new $52 trillion Medicare for All proposal that relies on $20 trillion in new taxes?

To say that Democrats in the Granite State are averse to broad-based tax hikes is an understatement. When a legislator brought up an amendment calling for a state income tax on top earners, her fellow Democrats were so anxious to distance themselves from it they voted it down in the same committee twice.

State politics here centers around what locals call the “New Hampshire Advantage” — no sales or income taxes. And Democrats who’ve run for statewide office proposing to raise either one have not fared well.

“Every so often, our party will go too far and back a tax proposal,” veteran Democratic state Sen. Lou D’Allesandro told NHJournal. “And the consequences are never good.”

The Medicare for All plan Warren released on Friday would be jaw-dropping even in the most liberal environs. The entire 2019 federal budget is around $4.4 trillion, for example, and Warren wants to spend more than $5 trillion a year on healthcare alone. This on top of her trillions in spending for the Green New Deal, guaranteed free childcare, free tuition, etc.

It also eliminates the private-sector health care industry which, as Warren acknowledged to NHPR earlier this week, would cost two million American jobs.

Warren insists that “we don’t need to raise taxes on the middle class by one penny to finance Medicare for All,” and has proposed a series of taxes on top earners, corporations, investors and (believe it or not) illegal immigrants.  She says providing a “pathway to citizenship” for people in the country illegally, and increasing legal U.S. immigration, would bring in $400 billion in new tax revenue.

“You get out, and you dream big and you fight hard for what you believe in,” Warren told reporters Friday as she defended her plan. “We need to be an America that dreams big, an America that aims high.”

Not surprisingly, some of her opponents are aiming back.

“She’s making it up,” Joe Biden said of Warren’s Medicare for All math. His spokesperson released a statement saying, “Senator Warren would place a new tax of nearly $9 trillion that will fall on American workers.

“The mathematical gymnastics of this plan are all geared towards hiding a simple truth from voters: it’s impossible to pay for Medicare for All without middle-class tax increases.”

The $9 trillion is a reference to Warren’s tax on larger businesses currently contributing to their employees’ healthcare. She would force them to keep paying 98 percent of that amount per employee–essentially a ‘head tax’ on every business with a health plan– to the government.  A $9 trillion business tax isn’t a message New Hampshire Democrats want to run on.

Political analysts agree that New Hampshire Republicans are likely to suffer in state and local 2020 elections due to Trump’s presence at the top of the ticket. But what happens in New Hampshire if a Democrat proposing trillions in tax hikes and shutting down the private sector healthcare industry is at the top of theirs?

“If Warren’s the option the Left chooses to go with, President Trump and the GOP are a lock here in 2020,” state Rep. Fred Doucette tells NHJournal. He’s the state chairman of the Trump 2020 campaign and says Warren is “unaligned with New Hampshire values.

“We don’t print enough money in this country to pay for all of her plans,” he said.

Sen. D’Allesandro reluctantly agrees that Warren’s plans would put New Hampshire Democrats at a disadvantage if it’s the face of the party.

“It would be a very dangerous situation for Democrats I’m afraid,” he said.

But Warren’s poll numbers, while flat of late, remain strong in New Hampshire and some state progressives are happy she’s setting the bar high.

“I love the fact that she’s aiming for the stars,” Democratic state Rep. Wendy E. N. Thomas told NHJournal. “I tell people —why start negotiations at less than what you want to accept?”

Joel Payne, a national Democratic strategist who worked for Hillary Clinton’s 2016 campaign, believes this is a good move for Warren. “She’s showing her math. And she’s following through on her promise to confront the system with big structural change. She’s been very clear she believes the middle class will be better off under her plan. She’s being bold. It’s what voters have come to expect from her.”

Any worries that Warren’s aiming so high that she might make the average New Hampshire voter uncomfortable?

“New Hampshire voters are tax-savvy compared to other states, and a $20 trillion tax hike doesn’t fit in with their ‘Live Free or Die’ values,” the RNC’s Nina McLaughlin told NHJournal.

Doucette was more direct: “People looking at the polls wonder how Donald Trump can win New Hampshire? This is how.”