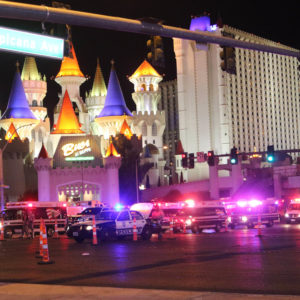 Photo by: GOTPAP/STAR MAX/IPx 2017 10/1/17 Atmosphere in the immediate aftermath of the mass shooting on the Las Vegas Strip (Las Vegas Boulevard) in Las Vegas, Nevada on Sunday, October 1st, 2017.
News

The recent attack on a country music festival in Las Vegas that left 59 people dead and over 500 injured has prompted a reevaluation of how to maintain public safety at concert venues in the Granite State.

The locations of mass shootings in America tend to attract a call for additional security to prevent future occurrences, such as in schools, churches, movie theaters and nightclubs. Now, some are pushing for the same security upgrades to take place at music venues, including both open air facilities and music halls.

Joe Gleason, assistant executive director of the Capitol Center for the Arts in Concord, said in an interview with NH Journal the shooting in Las Vegas reminded him of another attack on a music venue: the Bataclan Theatre in 2015.

Gleason said the Capitol Center has been undergoing a risk assessment review for its internal security and organization, including active shooter situations. He said this process to update the venue’s security began prior to the attack in Las Vegas last weekend, becoming routine during the past few months.

Gleason said political events at the venue always required additional security but now musical acts do as well. The venue primarily uses private security at events but has also utilized unarmed, plains-clothed officers depending on the circumstance. He said despite being located in a small “insulated” state, concerns have to be addressed and changes had to be made to their security approach.

“Short of living inside of a bubble, you’re not going to be able to protect against every risk out there in the world,” Gleason said. “I think precautions are what’s in order and not giving in or putting your head in the sand about it. The best you can do is take what are deemed as reasonable and precautionary measures.”

Capitol Center for the Arts is a member of the Association of Performing Associations of New England, which holds bimonthly meetings and Gleasaon said he expects security to be a popular topic of discussion.

Another music venue operator, Scott Hayward, owner of Tupelo Music Hall in Derry, said in an interview with NH Journal the shooting in Las Vegas presents a complicated challenge for music venues to address.

Hayward compared the attack to the aftermath of the Station nightclub fire in Rhode Island in 2003, which killed 100 people and injured 230 more. He said the nightclub fire was caused by several “avoidable” factors, which music venues reviewed and corrected afterwards. Music venues learn from past mistakes but he did not know what there was to learn from the attack in Las Vegas, according to Hayward.

“On something like this, I don’t think most people can connect with it,” Hayward said. “It’s just one of those things that’s so egregious. I’ve been to a lot of shows, but this is a different type of thing.”

Hayward said there are usually knee-jerk reactions to mass shootings in the call for additional security features, even saying a friend told him he should carry a gun. He said armed civilians or security at the gate would not have been able to stop the shooter, which makes protecting open air venues a difficult task. The security at Bank of NH Pavilion at Meadowbrook is satisfactory according to Hayward, but he said a similar situation occurring there can not be prepared for.

“The unfortunate thing about something like this, in my business, is that music is a thing that’s supposed to bring us together,” Hayward said. “We’ll have a concert with 600 people in the room, from ages 10 to 80; they’ll be Democrats and Republicans, people of every color and they’re there for the music. It’s kind of our escape and what brings us together. When someone uses that to blow things up, it just disgusts me.”

Private security companies reacted to the Las Vegas shooting by advising attendees at music venues not to submit to fear but also remain vigilant of their surroundings. These companies also advocated for additional security measures, including collaboration with law enforcement to increase man power and the strategic approach to concerts.

In an interview with NH Journal, Salerno said private security companies typically employ ex-law enforcement and military veterans who provide additional knowledge on the ground and assistance for event security.

Ostroy told NH Journal music venues will likely invest in additional security for upcoming events but said it will take a nuanced approach to implementing them. He said people want to enjoy themselves at concerts, which could be interrupted by additional access control measures, such as mandatory metal detectors, or a tiered security setup.