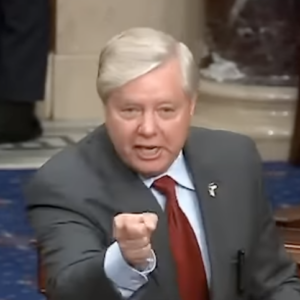 South Carolina Sen. Lindsey Graham unleashed on New Hampshire’s Sen. Maggie Hassan when she used a procedural trick to call for a “phony” vote to kill a gas tax she had just rescued minutes earlier.

“This gives phony and cynical a bad name. They wouldn’t let you do this in professional wrestling. If you think people are this dumb, you’re going to be sadly mistaken,” Graham said from the floor of the Senate.

The incident occurred during Saturday night’s  “vote-a-rama,” as it is called, leading to passage of the reconciliation bill, the so-called “Inflation Reduction Act.” Under the rules of reconciliation, which allows a budget-related bill to pass with just 50 votes, senators can offer unlimited amendments, which can also pass with a simple majority. When Democrats shoved through President Joe Biden’s $1.9 trillion “American Rescue Plan” in early 2021, for example, the GOP used the vote-a-rama to bring up votes to stop people in prison from getting COVID relief checks, prevent the packing of the U.S. Supreme Court and block a future carbon tax.

Hassan voted against all of those amendments.

On Saturday, Graham proposed stripping the bill of tax and fee increases on oil imports and production. As he put it in his amendment, “To strike a tax increase that would result in higher consumer prices for gasoline, heating oil, and other energy sources for Americans earning less than $400,000 per year.”

All 50 Democratic senators voted against his amendment, including Hassan, which killed it. Minutes later, Hassan took to the floor to offer essentially the same amendment, but under a different rule that requires 60 votes. Every Republican voted for it, as did Hassan and a handful of Democrats — all of whom knew there wouldn’t be 60 votes.

“When Democrats wanted their members to be able to vote in favor of something, one of them would raise a budget point of order, triggering a motion to waive it that was subject to a 60-vote threshold instead of a simple majority…They could vote to waive the point of order without worrying about it being added to the bill and potentially undermining unified Democratic support for the larger package.”

When Graham saw Hassan take to the floor to purpose this “phony, cynical” vote, he’d had enough.

“What you’re doing is deceitful, it’s dishonest, and we’re gonna call you out!”

Graham was then warned he was in danger of violating the Senate’s rules on decorum by impugning the motives of a fellow senator.

“I think Sen. Graham summed the situation up in his usual understated but accurate way,” Gregg told NHJournal.