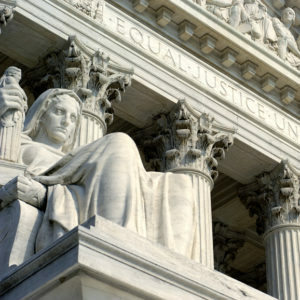 At the request of the Biden administration, the U.S. Supreme Court announced Monday morning it would not take up New Hampshire’s challenge to Massachusetts’s taxation of nonresident remote workers in New Hampshire v. Massachusetts.

In its order, the SCOTUS denied a motion for leave to file a bill of complaint in the case made by the Sununu administration, a motion made with bipartisan support in New Hampshire and backing from other low-tax states and organizations across the country. As a result, the justices declined to determine whether Massachusetts’s regulation violates the federal commerce and due process clauses.

Conservative Justices Clarence Thomas and Samuel A. Alito, Jr. could have granted the motion.

“By siding with the Biden Administration and allowing inappropriate taxation of NH citizens, the Supreme Court is setting a costly precedent. This decision will have lasting ramifications for thousands of Granite State residents,” said Gov. Chris Sununu.

The order comes after President Joe Biden’s solicitor general argued the motion should be denied because the “pandemic-specific circumstances make this a poor vehicle in which to address the broader issues of interstate taxation that New Hampshire and its amici identify.”

“I am very disappointed that the Supreme Court chose not to hear this case,” said GOP state Sen. Kevin Avard, whose district includes parts of Nashua, Hollis, Rindge and other border towns likely impacted by the tax. “The New Hampshire Legislature worked hard this year to cut taxes for our citizens everywhere that we could, and it has led us to the nation’s lowest unemployment rate. Massachusetts would be smart to follow suit and start by keeping their greedy fingers out of our wallets.”

Massachusetts imposed the rule via bureaucratic fiat — the Department of Revenue imposed it without any legislation — but the Bay State told the court the rule will expire on June 15, 2022. That’s 15 months of New Hampshire residents being taxed by another state on work they did on the Granite State side of the border.

As a result of the ruling, the Supreme Court has closed the most likely lane for an estimated 80,000 -100,000 Granite Staters who, in the opinion of many tax experts, were wrongfully taxed. The Sununu administration was asking the court to both stop the practice and to force Massachusetts to refund the taxes collected to working Granite Staters. With interest.

Millions of dollars of personal income are at stake.

The issue has created a rare moment of bipartisanship, with prominent New Hampshire Democrats — including Maggie Hassan, his possible 2022 opponent in a U.S. Senate race — backing Sununu’s efforts.

“This is the wrong position by the Biden administration,” Hassan said last month. “I’ve long said that attempts by other states to unfairly tax New Hampshire residents are unconstitutional. The Supreme Court must hear this case and reverse this bad-faith effort. We need strict and clear limitations set upon states that attempt to wrongly tax Granite Staters, and I will continue to push to ensure exactly that.”

“Granite State workers who were following public health guidelines at the height of the COVID-19 pandemic should not be punished with an out of state income tax. We are disappointed in the Supreme Court’s decision to not take up New Hampshire’s motion which would have challenged this anti-worker ruling.”

The intervention of the Biden administration was viewed as particularly damaging to New Hampshire’s efforts. Setting aside the precedents set by collecting taxes across state lines, the Biden administration argued the Supreme Court should refuse to hear the case because, it said, the case didn’t rise to the level of “original jurisdiction” — the court’s rule that oversees when it should take a case of one state suing another.

Meanwhile, the broader issue remains. New York, Pennsylvania, and three other states have similar, permanent laws in place. New Jersey and Connecticut sided with New Hampshire, asking the court to accept the suit, in hopes of ending New York’s treatment of their residents.

Arkansas, Delaware, Nebraska, and Pennsylvania also tax non-residents for work they do from home for in-state employers.

“The Supreme Court should not have refused to hear New Hampshire’s case against allowing Massachusetts’ politicians imposing taxes on men and women working in New Hampshire,” said Grover Norquist, president of Americans for Tax Reform. “No American should be taxed by politicians they cannot vote for or against. As someone once said, ‘Taxation without Representation is Tyranny.’

“It is sad that the Biden administration publicly pressured the Supreme court to allow this cross-border piracy.”