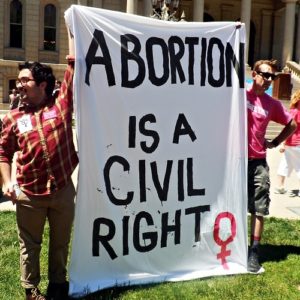 A leaked draft of a U.S. Supreme Court majority decision shows the court is poised to strike down Roe v. Wade, the controversial decision that created a federal right to abortion in 1973, Politico reported Monday night.

“We hold that Roe and Casey must be overruled,” the draft reads, authored by Justice Samuel Alito, a George W. Bush appointee. “The Constitution makes no reference to abortion, and no such right is implicitly protected by any constitutional provision.”

If true, this is an outcome elected New Hampshire Democrats have decried for months.

“We’re in danger of Roe v. Wade being gutted. This week, the Supreme Court will hear a case that attacks reproductive rights — putting women’s health and economic freedom at risk,” Sen. Maggie Hassan (D-N.H.) tweeted in Nov. 2021. “Dismantling Roe v. Wade would set us back and be devastating for women across the country.”

Rep. Annie Kuster agreed. “For nearly 50 years, Granite Staters have lived in a country where access to safe, legal abortion is a right—today, those protections are on the line,” she said in a tweet.

“This decision would upend decades of settled law and endanger health and safety by taking us backward. If SCOTUS won’t protect the right to choose, it’s up to all of us. We’ve passed legislation in the House to codify Roe v. Wade, and it’s time to get it done,” Rep. Chris Pappas tweeted following Monday’s news.

In fact, as legal scholars have repeatedly noted, overturning Roe would have no impact on New Hampshire’s abortion law. Abortion would remain legal in New Hampshire without any restrictions for the first six months of pregnancy.

A bill working through the legislature adds carve-outs for legal abortion after the 24-week mark, and Gov. Chris Sununu is expected to sign it should it reach his desk.

Joining Alito in his majority opinion are Justices Neil Gorsuch, Amy Coney Barrett, Clarence Thomas, and Brett Kavanaugh. Kavanaugh, Barrett, and Gorsuch were all appointed by President Donald Trump, who claimed from the beginning of his term he was going to end Roe.

“Let’s all say a prayer for our president, Donald J. Trump. He made this possible,” said Rep. Tim Baxter (R-Seabrook), a GOP primary candidate for Congress in the First District.

“If this is true, the public’s fury will be unleashed on the SCOTUS but should be directed at legislators who dodge their responsibility and fundraise off of the outrage,” Jon DiPietro, a Manchester GOP activist tweeted Monday night, echoing a long-held sentiment by the right that Roe exceeded SCOTUS’s authority in 1973.

It would also signal the end of a long practice of secrecy surrounding pending Supreme Court decisions. “No draft decision in the modern history of the court has been disclosed publicly while a case was still pending,” Josh Gerstein and Alexander Ward wrote for Politico.

“It’s impossible to overstate the earthquake this will cause inside the court, in terms of the destruction of trust among the justices and staff. This leak is the gravest, most unforgivable sin,” tweeted @SCOTUSBlog, an independent source that closely follows and reports on SCOTUS news, cases, and opinions.

Democrats are likely to make this a huge campaign issue in the midterms, hoping it would energize their base amidst Biden’s low approval ratings and economic turmoil.

“Get ready to knock like our rights depend on it… because they do,” tweeted state Rep. Matt Willhelm (D-Manchester).