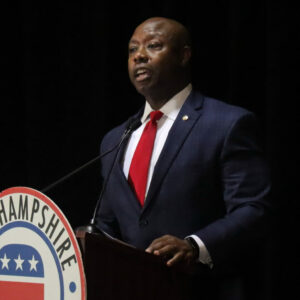 As Gov. Chris Sununu presented a message of positivity, unity, and anti-extremism to his fellow Republicans at the Doubletree Friday night, a group of anti-vaccinatio protesters was pushing its way into the hotel’s lobby to show their continued anger over COVID policy in the Granite State.

Sununu was on stage at the Amos Tuck Dinner — named for a 19th-century organizer of the Republican Party in New Hampshire — to introduce U.S. Senator and potential 2024 presidential candidate Tim Scott (R-S.C.). During his remarks, Sununu echoed a theme Scott often shares, that the GOP doesn’t do a good enough job getting out its message of successes.

Sununu listed what he views as accomplishments, from tax cuts to low unemployment to better-than-average COVID 19 numbers. “This is an amazing fact — did you know we’re the only state in the country that had less businesses close in 2020 than in 2019? Think about that,” Sununu said. 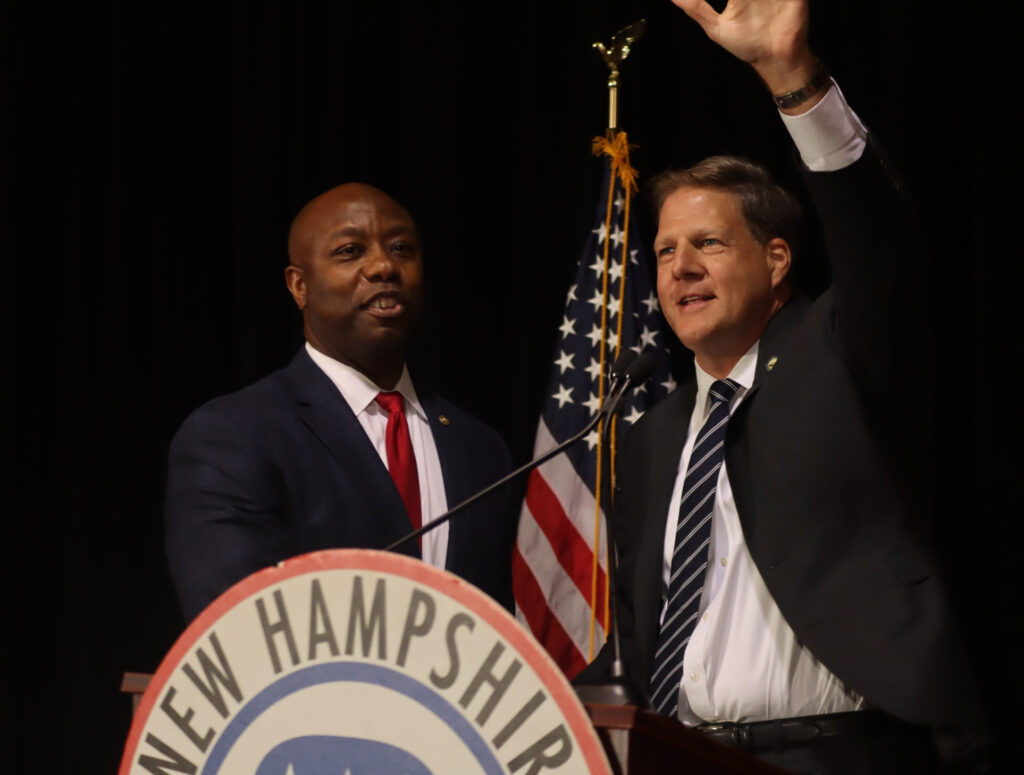 Unfortunately, Sununu said, too much GOP energy is spent on issues that don’t engage people where they live.

“We have to focus on the messaging that’s impacting individuals, and you don’t do it by screaming and shouting and playing to the fringe that’s out there that’s about misinformation and conspiracy theories and all that garbage,” Sununu told the crowd. “You do it by looking at your neighbor… or your co-worker and explaining to them what this party has done to transform the state.”

Even as Sununu was making his case, some 40 anti-vaccination protesters who’d been lining the streets outside the venue swarmed into the hotel lobby bar area, chanting “Shut it down!”

Attendees in the auditorium were unaware of the brouhaha outside.

Scott, the first African American Republican to serve in the U.S. Senate since Massachusetts’ Edward Brooke departed in 1979, gave a low-key speech centered around his autobiography. He stumbled out of the gate by referring to Gov. John Sununu, a mistake he used to make fun of himself later in the speech.

Scott talked about growing up in poverty and being raised by a single mother in the South Carolina Lowcountry.

“I failed civics. That’s the study of politics,” Scott confessed. “But after eight years in the Senate, I will tell you I’m not the only one who failed civics.”

Scott made only passing reference to current events in the Senate, such as the Democrats’ inability to get 50 votes for a reconciliation bill, talking instead about broader issues like crime and criminal justice, an issue he’s taken the lead on for his party. He expressed concern about anti-police sentiment, particularly among Democrats, and urged his fellow Republicans to publicly show their support for law enforcement.

“It’s up to us to stand up for the men and women in blue when others won’t.” Scott also noted a recent poll showing 81 percent of Black Americans want at least the same police presence they have now, if not more. 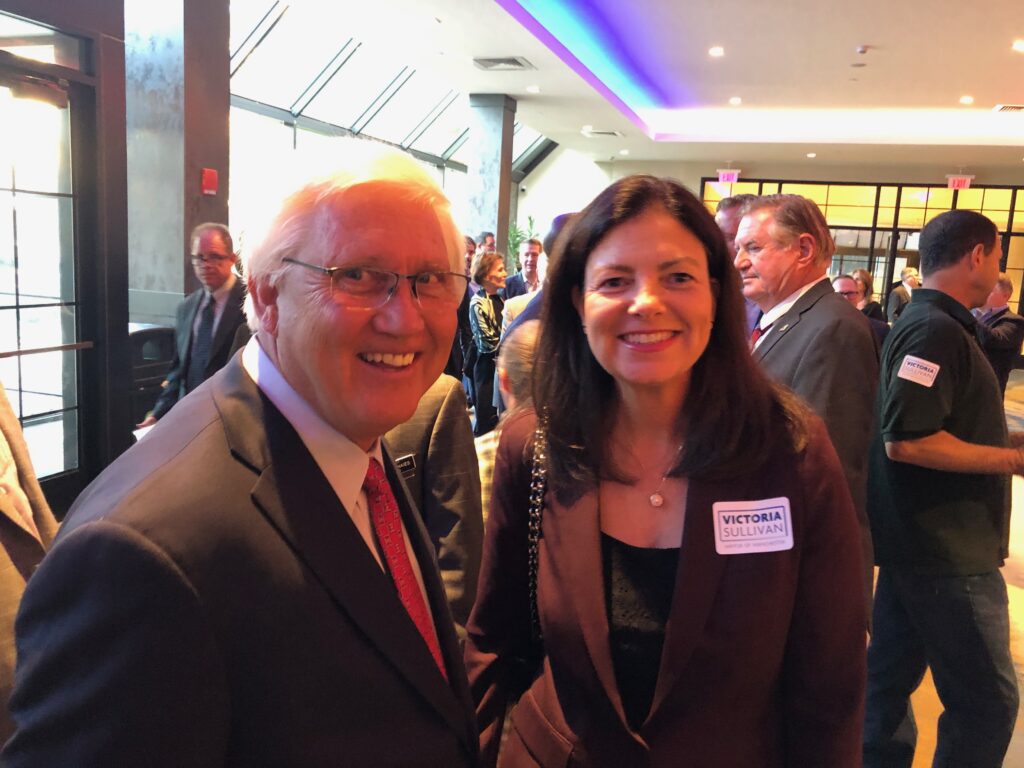 Several 2022 primary candidates, and potential ones, were in the audience, including former U.S. Senator Kelly Ayotte, who got a shout-out from Scott. Ayotte is widely believed to be considering a run for governor next year, and one of her potential opponents, Senate President Chuck Morse (R-Salem), addressed the audience after Scott.

Scott has made the issue of party unity one of his key issues, and he urged NHGOP primary candidates to come together after their races. “The road to socialism goes right through a divided Republican Party.”

And despite botching his name, the South Carolina Republican made it clear he’s part of the national GOP effort to get Chris Sununu to run for the U.S. Senate.

“I’ve been asking myself, is there someone, somewhere who can help us add a seat to the U.S. Senate? And I thought to myself, being governor is an amazing job, and maybe running for governor every two years can give you an ulcer,” Scott said, referencing Sununu’s recent health issues.

“Maybe one of the ways we can calm the ulcers in New Hampshire is by having governors become senators,” Scott added. “‘Sen. Chris Sununu’ has a ring to it.”