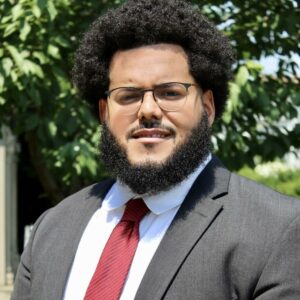 During a public hearing in Exeter, N.H. on school policy regarding classroom instruction on race and equity Thursday night, SAU 16’s top diversity exec acknowledged he is a member of the Black Lives Matter organization and has no plans to leave.

“I am black, and I can never separate myself from Black Lives Matter,” Andres Mejia, director for diversity, equity, inclusion, and justice for SAU 16, told parents. “My life matters.”

Mejia, SAU 16 Superintendent David Ryan, and other school leaders were addressing the teaching of diversity, equity, inclusion, and justice throughout the seacoast school district when a parent asked about Mejia’s affiliation with the Black Lives Matter movement.

Meija is listed as a board member for Black Lives Matter Seacoast. That group’s website gives its mission: “Our purpose is to dismantle anti-Blackness, fight against racial injustices and end police brutality.” During last year’s election season, BLM Seacoast released a list of demands for candidates, including “no more school resource police officers.”

Meija was asked if he could treat religious students fairly.

“My role is working for all students,” Meija started.

When a man started shouting from the back if that also applied to “conservative” students, Meija said it did.

“I said all children, and conservative children are part of that,” Meija said.

The tone of the questions — not to mention the occasional shouting from the back of the auditorium — indicates deep divisions over the equity process among some members of the public. However, on the whole the audience in attendance appeared supportive of the district’s inclusion and diversity efforts.

“We’re not going to stop the work that we’re doing, because it’s the right thing to do,” Ryan said.

Ryan said he gets frequent questions about what the school is doing, and he wants to inform the community about the diversity efforts. He acknowledged there was a problem with a recent diversity training session for Kingston teachers conducted by the organization 2Revolutions, which employs Critical Race Theory scholars.  There were accusations of anti-white bias in the training materials.

Ryan said he addressed the matter with 2Revolutions, and changes were made going forward.