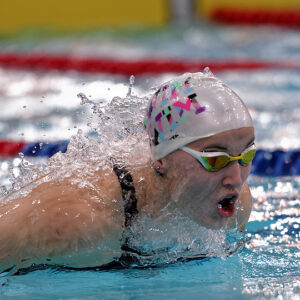 I am a woman, a lifelong athlete, former Dartmouth College athlete, professional soccer player, mother, and lawyer. I have played sports competitively and successfully my entire life. That has shaped my identity and who I am. It has also provided me with opportunities I would not have had otherwise.  However, I would not have had this success if I had been competing against biological men.

When Title IX was signed into law in 1972, it guaranteed both equal treatment and equal opportunities under the law for women. Today, Title IX is being violated by every institution in New Hampshire that allows biological males to compete unfairly against biological females. It is being done in the name of “fairness” to the trans community, a group of people I have great sympathy for and who need a different solution to participate in athletics. While they deserve a path to competitive sports, they should not get to do so at the expense of biological females, whose athletic careers will be sacrificed unless Title IX is upheld.

This isn’t political. And it is not an exaggeration. This is happening right now, and the cautionary tales are overwhelming and sad.

In 2016-2017, Cece Telfer, a biological male, competed on the men’s Franklin Pierce track team without success. In 2019, when competing as a transgender woman, Cece won the NCAA championship. Does that sound right to you?

I grew up in Connecticut before moving to New Hampshire.  There, two transgender track athletes recently won 15 state championships and broke 10 state records formerly held by 10 different biological girls. Those two transgender athletes also took away over 85 opportunities to compete at higher-level track events from biological female athletes. Chelsea Mitchell, a biological female sprinter who came in third behind the two transgendered athletes said “[w]ith every loss it gets harder and harder to try again. That’s a devastating experience. It tells me that I’m not good enough; that my body is not good enough; and that no matter how hard I work, I am unlikely to succeed because I am a woman.” Does that sound right to you?

At the Ivy League championships last month, Lia Thomas, a transgender swimmer competing for the University of Pennsylvania. won three events and set five League records. According to Swimming World editor-in-chief, John Lohn, Lia’s final 50 yards “’appears to be the fastest in history,’ fueling speculation that Thomas held back until the end to avoid blowing the competition out of the water.” Despite being an average performer on the men’s swim team, Lia is now currently on track to break the records held by Katie Ledecky who won 7 Olympic gold medals, 15 world championships and is widely considered to be the greatest female swimmer of all time. Does that sound right to you?

The women those biological men are displacing have worked just as hard, sacrificed just as much, and have every right to compete for a place on the podium with other biological women. This is their time to shine. But that’s not what’s happening. Just as many predicted, what is happening is the systematic displacement of biological females by biological males across the competitive sports spectrum.

The reason is simple and scientific. There are fundamental biological differences between males and females, and those differences impact athletic performance. Scientific studies prove the average male is bigger, stronger, and faster than the average female.  It doesn’t take a doctor or scientist to understand this. My 8-year-old daughter and my 6-year-old son both know this to be true – not because it is complicated but because it is so fundamentally obvious. A recent study found trans women retained their athletic edge after one year of hormone therapy, the current time period required to participate as a trans female athlete in the Olympics.

I think everyone can agree that Serena Williams is one of, if not the best, female athletes of all time. Her max bench press is 225 lbs. Amazing for a woman. Yet, my middle-aged husband can do 90 repetitions of Serena’s max bench. Serena said in a 2013 interview with David Letterman, “If I were to play Andy Murray, I would lose 6–0, 6–0 in five to six minutes, maybe 10 minutes … The men are a lot faster, and they serve harder, they hit harder, it’s just a different game. I love to play women’s tennis. I only want to play girls, because I don’t want to be embarrassed.” John McEnroe underscored that by saying, “Serena Williams would only be ranked 700th in the world ‘if she played in the men’s circuit.’” From the greatest of all time to 700th?  That’s quite a difference. Who can claim that an individual’s gender choice erases their biological advantage?

My children recently watched a special on Pompeii about the volcanic eruption that wiped the town off the map in 79 AD. They were fascinated by what scientists could learn from the human remains they found throughout the city. The first thing the scientists described was the biological sex of the victims.  Gender differences are one of the fundamental, elemental, immutable distinctions in all life on this planet and yet suddenly humans believe otherwise about their own species? That it is a matter of choice? It defies science, but most of all it defies common sense.

Finally, it is concerning to contemplate what they might do to their bodies to compete against trans athletes. Please join me in fighting for what is just, fair, and right–restoring the protected right of biological women to compete on an even playing field against other biological women. It’s time for New Hampshire to protect Title IX by passing HB1180 and saving women’s sports, not just for today’s athletes but for our children.

Melissa Roth was drafted to play professional soccer by the Atlanta Beat of the Women's United Soccer Association (WUSA). She is a graduate of Dartmouth College where she was an All-Northeast and All-Ivy soccer player. She received her JD with honors from the University of Connecticut School of Law. She wrote this for NHJournal.com.