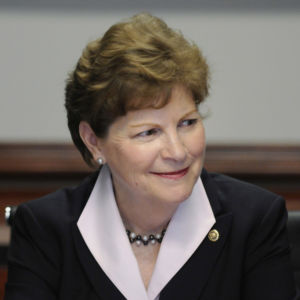 CNN is reporting yet again that New Hampshire Senator Jeanne Shaheen is one of the few Democrats open to possibly supporting Judge Brett Kavanaugh, President Trump’s pick for the Supreme Court.

On Monday the cable news network published an updated “Whip List” of where senators are on the Kavanaugh vote, putting red-state Democrats like Joe Manchin (WV) — who met with Kavanaugh for two hours yesterday– on the “Undecided Red-State Democrats” list, and following up with their report of “Undecided Democrats” in other states.

NHJournal has repeatedly reached out to Sen. Shaheen’s office for confirmation, but her spokespeople have refused to confirm or deny that Sen. Shaheen may be a “yes” vote on Kavanaugh’s confirmation.  Sen. Chuck Schumer (D-NY), the Democrats’ leader in the senate, is pressuring his members not to make any commitments on Kavanaugh or to meet with him–part of what Politico.com describes as the “Schumer strategy” to defeat the Kavanaugh nomination.

“Schumer’s strategy starts like this: Hold his caucus in line and force Republicans to cough up 50 votes on their own,” Politico reports.  Thus far, Shaheen has yet to schedule a meeting with the nominee.

Progressive groups are adamant that Democrats must oppose Trump’s pick, claiming that the right to legal abortion is at stake. Democratic “dark money” groups like Demand Justice are spending millions to oppose him. One feminist group went so far as to send “Filibuster Panties” to the offices of every woman US Senator, including Shaheen and Sen. Maggie Hassan, encouraging them to block a vote on Kavanaugh.

In addition, polling by Pew Research and Morning Consult shows that Democratic voters oppose Kavanaugh by 47 points and 33 points, respectively.

Shaheen isn’t up for re-election until 2020.  Even so, will this liberal US Senator in a purple state really vote for a Trump nominee to the Supreme Court? At the moment, Shaheen’s silence is deafening.