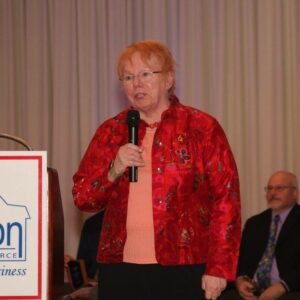 Sources tell NHJournal Lynne Ober lost her post as vice-chair of the Finance Committee over mishandling of her duties while serving as chair of the Committee on Conference during negotiations on HB 2.

None of the NHGOP sources would speak to NHJournal on the record, and Lynne Ober hung up on the NHJournal reporter who called for comment.

While some conservative-leaning members had previously complained about Ober’s conduct as a member of leadership, the issue came to a head when she ignored instructions from Speaker Sherman Packard (R-Londonderry) and Majority Leader Jason Osborne (R-Auburn) not to call a committee vote on two contentious issues: The governor’s paid leave legislation and language regarding legislative controls on a governor’s “state of emergency” powers.

Many members of the House Freedom Caucus opposed the former and wanted stricter controls on the latter, putting them at odds with the GOP majority in the state Senate. According to multiple sources, House leadership was still working on a compromise involving the two issues when Ober, ignoring her instructions, called for the vote. Representatives were left with only two options: Vote down the deal and, with it, potentially the entire budget, or vote for a budget without knowing if it could win approval.

House members, from the leadership to the rank and file, were outraged.

“If you’re going to be a member of leadership, do your damn job,” one source said. “Pull a stunt like that, and there have to be consequences.”

Tuesday’s action was swift. Soon after being stripped of her Finance Committee post, the two Obers had resigned. By 3 p.m. Tuesday both names had “disappeared” from the NH.gov House website and the Finance Committee webpage showed a “n/a” in the vice-chair slot.

According to the NH.Gov website, both Obers were serving their ninth terms in the House representing Hudson and Pelham. Their departure leaves a potential of six unfilled House seats: Five Republicans and one Democrat. And with the House GOP’s narrow majority, sources say, every seat counts.

The current breakdown is 210 Republicans, 186 Democrats.

There are currently two special elections scheduled to fill the vacancies left by the deaths of Reps. David Danielson (R-Bedford) and Douglas Ley (D-Jaffrey).

Rep. Michael Gunski has moved out of his Goffstown district, and Rep. Anne Copp’s standing as a House member is currently in question. The notoriously difficult-to-pin-down Republican has apparently moved out of her Derry district, but she has yet to submit a letter of resignation or confirm a new address.

As a result, Republicans may lobby the communities to call special elections to fill these seats in heavily Republican districts, despite the expense.

Asked about the problems created by losing two GOP House members with such a small majority, one member of the caucus sighed and said, “Trust me — it’s worth it.”