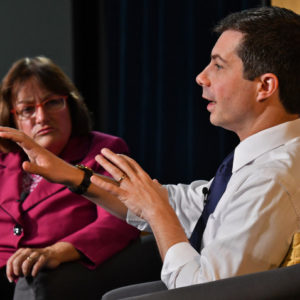 On Wednesday, New Hampshire Congresswoman Annie Kuster endorsed former South Bend, Ind. Mayor Pete Buttigieg in the First in the Nation presidential primary, calling him “the leader who can finally turn the page on the Trump presidency and bring our nation together.”

Kuster is one of four members of the New Hampshire congressional delegation– all Democrats — and the only one to endorse a candidate in the all-important Granite State primary on February 11. While Kuster doesn’t have the same stature or political organization as governors-turned-senators Jeanne Shaheen and Maggie Hassan, she’s popular among the state’s progressives. And given Buttigieg’s slipping polls — in the RealClearPolitics average, he’s lost about a third of his Granite State support since Christmas — this could be just the boost he needs to rebuild his momentum.

But more and more in Democratic circles, the attention has turned away from Buttigieg and toward what appears to be a potential political civil war between Joe Biden and Bernie Sanders. And if that happens, one of the few early-state Democrats who could have an impact on the outcome just took herself out of the game.

According to reporting by James Pindell at the Boston Globe, Kuster’s had a growing relationship with Buttigieg over the past few months, and one of her key political allies, Stonyfield Yogurt founder Gary Hirshberg, endorsed the mayor last year. So perhaps it’s a matter of personal affection and political alignment.

Whatever her motive, the fact remains that there are only six elected congressional Democrats–and no Democratic governors — in Iowa and New Hampshire. Two have now endorsed Buttigieg and one, New Hampshire’s Shaheen, is pledging not to endorse anyone in the presidential primary, “period.”

This leaves the Democratic establishment with few leaders to rely on if the “Sanders Scenario” they fear begins to emerge.

It goes like this: Sanders wins Iowa, then rides that momentum to a win in New Hampshire — a state he carried in 2016. Bernie then becomes the prohibitive favorite in Nevada, he concedes South Carolina to Biden and instead takes his $90 million or so in fundraising cash to Super Tuesday. Sanders powers up his delegate count in progressive states like California, Massachusetts and Colorado, and then he’s off to the convention. And possibly, some Democrats fear, the nomination.

The political press is full of stories with ominous headlines like ‘Fears of Sanders Win Growing Among Democratic Establishment‘ and ‘Democratic Insiders Say: Bernie Could Win the Nomination.‘

Most of them aren’t happy about it. Former Chicago Mayor Rahm Emanuel told the AP, “You need a candidate with a message that can help us win swing voters in battleground states. The degree of difficulty dramatically increases under a Bernie Sanders candidacy. It just gets a lot harder.”

Few prominent New Hampshire Democrats are willing to criticize Sanders on the record. Revelations about the DNC’s pro-Hillary Clinton bias in 2016 created a grassroots blowback that still has party leaders on eggshells.

However, the silence was broken on Tuesday when Democratic National Committeewoman and former state party chair Kathy Sullivan wrote an op-ed for the New Hampshire Union-Leader critical of Sanders. Sullivan argued that Sanders isn’t, in fact, all that popular in New Hampshire, and she credits his huge 61 percent victory in 2016 to “Clinton fatigue.”

“I think the most obvious reason is that the results four years ago were not just driven by support of Sanders, but also by primary voters rejecting Hillary Clinton. It pains me to say that, as I supported her and still greatly admire her.”

Then Sullivan makes this observation: “Electability is a crucial liability for Sanders. Democrats want to win, and many are afraid that Sanders is the candidate least able to attract voters in the places Democrats need to reach 270 electoral college votes.” One of those places, by the way, is New Hampshire.

If Joe Biden wins Iowa, he’s all but certain to become the nominee and the Bernie issue goes away (for the most part.) If Buttigieg wins Iowa, the race stays wide open through South Carolina and probably beyond.

But if Bernie Sanders wins Iowa, the last line of defense for Democrats hoping to keep him from either being the nominee or playing a key role at the convention is New Hampshire. And half the Democratic team — Shaheen and Kuster — have benched themselves.

That’s good news for Sanders, who’s running an anti-Establishment candidacy and doesn’t need endorsements. It’s the Democrats hoping to stop him, Biden and Warren in particular, who could use the help.

Kuster has a terrific track record of picking Democratic presidential candidates. The last four she supported all went on to become the nominee.

So far the Democratic establishment’s approach to the threat posed by Sanders is to keep insisting he can’t win and hoping he’ll just go away.  That’s the same strategy establishment Republicans used on Donald Trump.