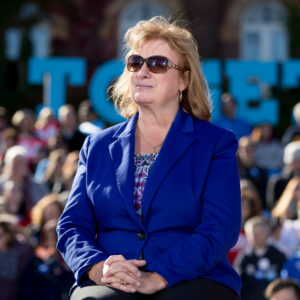 Rep. Carol Shea-Porter Announces She Will Not Seek Reelection

Rep. Carol Shea-Porter made a surprise announcement Friday afternoon that she would not seek reelection in 2018.

“Thank you so much for electing me to Congress for four terms. You gave me the great honor of representing our state and being the first woman ever to be elected to federal office from New Hampshire, and the first Democrat to represent New Hampshire’s First District in 22 years, and I have worked each day with only one thought—to serve our state and our nation. But the time has come in my life to pause and decide on a different path, so I am announcing my intention to leave the House of Representatives in January 2019, when my present term ends.”

Shea-Porter said while she would enjoy being part of another midterm election cycle, she “felt the tug of family at our reunion on Independence Day” and decided against a run. Shea-Porter was first elected to Congress in 2006, serving until she was defeated by former Rep. Frank Guinta, R-N.H, in 2010. She defeated Guinta in 2012, lost to him in 2014 and defeated him in 2016. The seat, swinging back and forth between the two parties, is considered one of the most competitive in the country.

Sen. Andy Sanborn, R-Bedford, is a candidate to replace Shea-Porter in the First District. He released the following statement upon hearing Shea-Porter would not seek reelection:

“First I would like to thank Congresswoman Carol Shea-Porter for her years of public service. While we had differences of opinion about the future of our county there is no doubt that in her years of service she always did what she thought was best for the people of New Hampshire.”

“I made the decision to run for Congress because I wanted to see serious change in Washington and I know that I am still the best candidate to fulfill that vision. I am the only candidate running that has a proven record of winning competitive races in the state and I know that my message of limited government, lower taxes, and personal responsibility will resonate with all voters in Congressional District 1.”

“The news today from Representative Shea-Porter, following her record of obstructing all meaningful reform in Washington since the election, is welcome news for Granite staters who have grown tired of her ineffective leadership. New Hampshire has a fantastic opportunity to replace her with a Republican representative who will work for the people of New Hampshire’s First Congressional District.”

“Thank you Carol-Shea Porter for your four terms of service to New Hampshire and our country. You have served the Granite State with great distinction. Your unflinching devotion to the ‘99% of the rest of us’ for over a decade has been a clear call for reform & progress. New Hampshire is proud and honored to have you represent us in Washington and your presence will be dearly missed after 2018. Your leadership has undoubtedly inspired so many to stand up and fight for what they believe in. As the first New Hampshire woman elected to federal office, you are trailblazer and a role model for us all. While we are saddened by your departure, we know your leadership will have paved the way for another great New Hampshire leader to follow in your footsteps.”