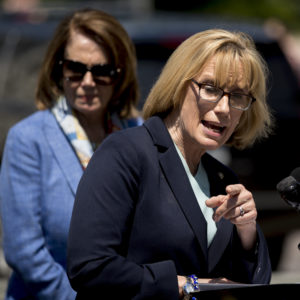 The Rent Is Too Damn High in San Fran and Boston–and Sen. Hassan Wants N.H. To Pay

“Kamala Harris Wants You To Subsidize Someone Else’s Rent”

Those are just a few of the headlines that greeted a proposal by California progressive (and likely 2020 POTUS candidate) Sen. Kamala Harris to provide taxpayer-funded tax credits (aka “cash”) to help subsidize high rents in communities like San Francisco and Boston, MA. It’s just the sort of socialism-inspired policy one might expect to be supported by people like Sen. Bernie Sanders, Alexandria Ocasio-Cortez and… Sen. Maggie Hassan?

“As far too many families scramble to afford the cost of living, we must keep working to find solutions to our affordable housing crisis,“ Sen. Hassan said in a statement. “This common-sense bill would create a refundable tax credit to help bring relief to families who struggle to afford their rent and expand economic opportunity for hard-working Granite Staters and Americans.”

The so-called “Rent Relief Act” is really a “I want to live in a major urban area but want you yokels to help cover my rent” act. The bill also includes utilities in the cost of rent, driving the price of subsidies even higher.  And because it’s a tax credit–not a deduction–even if you pay zero taxes, you still get the cash.

The basic idea of the Rent Relief Act is that low-or middle-income households that pays over 30% of their income for rent could claim a refundable tax credit for a percentage of rent paid above that 30% threshold, with the percentage depends on the household income. (households spending over 30% of their income on rent and earning less than $100,000 or $125,000 depending on how expensive a region is)

Maybe you think people earning up to $125,000 should get free money to fund part of their rent in LA or NYC. Maybe you think taxpayers who lived with their parents for years to save up a down payment and pay for their own homes should kick in to cover the rent on high-rise apartments for Millennials who rented a cool pad that they can’t afford?

And, Dorfman notes, the economic impact would be to increase rents across the board, including on families who can’t get the “free” money. “While such a bill would provide some relief to renters currently spending a high share of their income on rent, it would likely do more to enrich landlords than anything else,” he concludes.

This makes perfect sense if you represent a state like California.  But why would Maggie Hassan, a US Senator from a state like New Hampshire, support this?