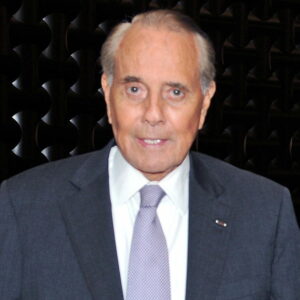 The last time I talked with Bob Dole it was nearing sunset on a glorious late October afternoon in 1988. On that occasion, he displayed his trademark trait, the quality that brought him attention and, all too often, got him in trouble: His sense of humor.

It’s a quality most politicians highly value, but which is sadly lacking in today’s political arena.

It all began on Monday, March 7, 1988. I was a young TV reporter and the Kansas senator was campaigning for the Republican presidential nomination. (His second of three tries.) Dole was doing a “fly around” on the eve of the next day’s Super Tuesday when 20 states (and American Samoa) would hold their primaries and caucuses. I was waiting when his plane touched down in Cape Girardeau, Missouri, which would be voting the next day.

Dole walked up to me on the tarmac, extended his left hand, and said, “Hi, Bob Dole. How am I looking here tomorrow?” I told him my father and then-fiancé were planning on voting for him. He asked, “What about you?” I smiled and with suitable vagueness for a journalist answered, “We’ll see.”

Fast forward seven months to the lovely late Indian summer evening I mentioned earlier. Dole was doing yet another round of fly-around interviews, this time on behalf of George H. W. Bush, the Republican nominee, who would be facing Democrat Michael Dukakis at the ballot box a few days later.

Once again there was the outstretched left hand and the friendly greeting. “Hello, I’m Bob Dole,” he said. He did not remember me. Not that I expected he would. I was one of literally hundreds of reporters he had spoken to since our last encounter. And let’s be honest: When you’ve met one reporter, you’ve met them all.

Still, I prompted his memory, hoping it might spark a faint recollection. “Yes, we met here at this very airport last March on the day before Super Tuesday. I told you my father and fiancé were voting for you.”

Dole instantly shot back: “You needed a bigger family.”

That lightning-quick retort was witty, slightly self-deprecating, even a tad charming. It was vintage Bob Dole.

There were times—a lot of times, in fact—when his sense of humor landed him in hot water. There were occasions when he went too far, when the joke was more ferocious than funny, more dour than droll.

You certainly didn’t want to be on the receiving end of his tongue when he was angry, either. Remember what he famously snapped at Bush on live TV during the heat of the ’88 primary campaign? “Stop lying about my record.”

And it didn’t take a psychiatrist to see much disappointment was festering just below the surface, hurts that often came out in ways that bordered on self-pity. That less-than-flattering side of his personality was brilliantly captured in Dan Aykroyd’s devastatingly spot-on “Saturday Night Live” impersonation.

Yet there was far more of the “good Dole” humor than the bad. It was filled with warmth, even a passion, that made this most inside of all Washington Insiders human and approachable. You may not agree with what he said, but you couldn’t keep a smile from spreading across your face when you heard him say it.

Much has changed about politics in general and Washington in particular since Dole’s day. Jocularity has gone the way of the dodo. What passes for humor today is using laughter to belittle the opposition. Politicians rarely, if ever, make fun of themselves anymore. In a climate where everyone sees themselves as utterly right and everyone who disagrees with them as totally wrong, DC is now as merry as Josef Stalin’s Moscow.

That’s truly a pity. Because in an age when there is so little to be amused about, a little laughter would go a long way. Our political leaders could lead by example by laughing at themselves, their flaws, foibles, and failures a little more often.

“You needed a bigger family.” Thanks for the chuckle, Senator Dole. It’s still making me smile 33 years later.