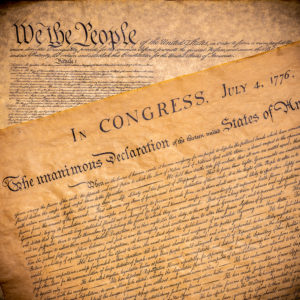 Many of the activities associated with Independence Day have been canceled this year, including parades, fireworks, and large community and neighborhood barbecues.

During this quieter holiday, the quiz below, from the Ashbrook Center at Ashland University, provides the opportunity for you to reflect on our shared history as a nation and test your knowledge of our nation’s creation, which is marked by the approval of the Declaration of Independence on July 4, 1776.

1. Who is considered to be the primary author of the Declaration of Independence?

2. What was the colonists’ government called at the time of the Declaration of Independence’s signing?

3. Representatives from 13 colonies signed the Declaration of Independence.   Which of the following was not a colony at that time?

4. The Declaration of Independence lists a number of grievances against the British king. Which of the following was not among them?

A. He has affected to render the Military independent of and superior to the Civil power

B. He has imposed Taxes on tea

D. He has forbidden his Governors to pass Laws of immediate and pressing importance

5. The final sentence of the Declaration of Independence says the signers pledge what three things to each other?

A. Life, liberty and the pursuit of happiness

B. Loyalty, freedom and security

6. Who wrote the pamphlet “Common Sense,” which was an attack on monarchy published in January 1776 that helped to turn American public opinion toward independence?

8. The Revolutionary War continued until the signing of the Treaty of Paris, which happened in what year?

9. Who was the king that reigned over the colonists at the time of the signing of the Declaration of Independence?

10. Which signer of the Declaration of Independence stated that this holiday “ought to be solemnized with Pomp and Parade, with Shews, Games, Sports, Guns, Bells, Bonfires and Illuminations from one End of this Continent to the other from this Time forward forever more”?

Jeffrey Sikkenga is executive director of the Ashbrook Center at Ashland University, Ashland, Ohio. He wrote this for InsideSources.com.