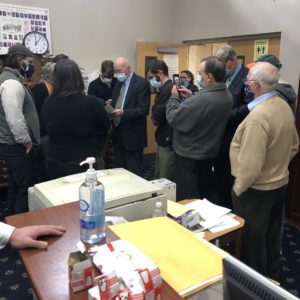 On Wednesday, the Secretary of State’s office wrapped up the sixteenth and final recount requested by candidates in New Hampshire, finalizing NH election results. In all 16 recounts, the results remained the same.

Republicans now officially hold a majority in the state Senate, the House of Representatives, and the Executive Council. The GOP flipped all of these bodies from Democrat majorities, the only state in the country to flip both chambers of the legislature to GOP control.

Executive Councilor Debora Pignatelli canceled Executive Council District 5’s recount early in the process Wednesday after the ballots in Merrimack were reviewed. To the applause of the room, she thanked the Secretary of State Bill Gardner, Deputy Secretary of State Dave Scanlan, and the entire staff. She then conceded defeat and congratulated Dave Wheeler on his victory, wishing him luck.

On election night, Merrimack underreported the vote counts for the Executive Council race by 2,032 votes. Their original tally was 6,467 for Wheeler and 7,253 for Pignatelli. On the Friday following the election, the town corrected that report and their updated tally showed 8,119 for Wheeler and 7,633 for Pignatelli. Wheeler led by 2,499 votes heading into the recount.

The hand recount showed the vote tally at 8,052 for Wheeler and 7,586 for Pignatelli in the town of Merrimack. Wheeler lost 67 votes on hand recount there, and Pignatelli lost 47 – a net boost of 20 votes for her, narrowing Wheeler’s margin only minimally to 2,479.

“It is very clear I would not prevail if we proceed,” Pignatelli said during her concession.

Harrison deBree, a Republican State Representative candidate from Rochester, came the closest to overturning an election night result. Rep. Timothy Fontneau (D-Rochester) led deBree by only ten votes heading into the recount there and only held on to his seat by four votes after the recount.

The biggest change happened in Windham, where each Republican candidate for State Rep gained around 300 votes in the recount process, with the top Democrat losing 99 votes. The other three Democrats all gained around 20 votes.

The Ballot Law Commission meets next Monday, November 23, to review the Windham case.

Two of the state Senate races were recounted in their entirety, each with about 35,000 votes cast. In state Senate District 11, Gary Daniels prevailed over Senator Shannon Chandley. Kevin Avard held onto his lead in District 12 over Senator Melanie Levesque. Both races featured a rematch from 2018.

Senator Jeanne Dietsch conceded her recount in District 9 against Denise Ricciardi after three-fifths of the recount was complete.

The Executive Councilors, four Republicans and one Democrat, will be sworn-in on January 6, following Governor Sununu’s third inauguration.