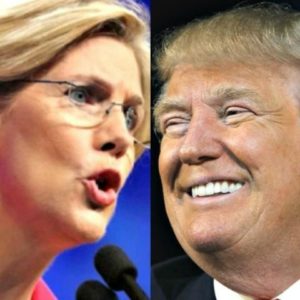 She says she’s not running.

And yet the (very) early tea leaves from the “First in the Nation” primary state already point to the match-up many pundits dream of:

Let’s take a moment to insert all the standard disclaimers: We haven’t even gotten to the midterms yet, two years is a political eternity, Sen. Warren could (theoretically) lose her re-election bid in November, President Trump could (less theoretically) be unable to seek re-election due to incarceration, etc.  The fact remains that the new poll from Suffolk University aligns with the emerging conventional wisdom:  Democrats want Liz Warren and the GOP is going to stick with Donald Trump.

In his analysis of the numbers. Suffolk University’s David Paleologos notes how Sen. Warren’s strength draws from virtually every other major Democratic candidate.

“When we first asked likely Democratic primary voters in New Hampshire who they would prefer—and we left Liz Warren’s name off the list— we got the expected results:  Joe Biden and Bernie Sanders well ahead of the pack of list seven possibilities:

“Then we introduced Sen. Warren’s name to the mix,” Paleologos told NHJournal, “and she cleared the field:

According to Paleologos, what makes Liz Warren’s position so strong is that “looking at the cross tabs, what we see is that all of the candidates lose something to Elizabeth Warren. Most of the candidates lose about one in five core supporters between scenario one without Warren and scenario two. And [former Massachusetts governor) Deval Patrick and Bernie Sanders lose a very big share of their voters.”

If Warren were merely strong in New Hampshire because of geography, the implications would be as significant. Instead, her strength is ideological–she’s the first choice (by far) of the voters looking for a nominee on the left end of the Democrats’ spectrum.  Plus, the fact that a third of Biden voters would jump on her bandwagon shows she’s strong with more old-school Democrats as well.

“On the progressive side, it appears voters are saying ‘Sanders had his chance,'” Paleologos suggests. “Elizabeth Warren is a little bit younger, a woman who has been carrying the challenge to big business, big dollars in politics.  And you may have some Hillary Clinton supporters who, if given the choice, either gravitate to Biden or to Warren, but not to Sanders.”

And that’s how Sen. Warren wins the nomination: Progressive voters, a few establishment voters, and some Hillary voters still smarting from the Bernie vs. Hillary fallout.  What about President Trump?

Two months ago, a New Hampshire poll gave him a narrow six-point lead over Gov. John Kasich. In the new Suffolk poll, he’s crushing all comers:

Trump lost New Hampshire, though narrowly, to Hillary Clinton in 2016. It’s a state more known for it’s moderation than it’s bombast, where candidates with names like Bush, McCain and Romney tend to do well. For Trump to be dominating like this, Paleologos notes, is a sign that he’s in no real danger within his party.

Once again: It’s early, it’s politics and it’s Trump.  But if you are hoping for a Trump vs. Warren throwdown in 2020, we are well on our way.