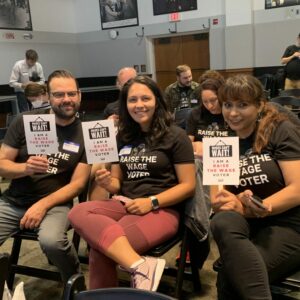 When progressives gathered — live and via the internet — for a One Fair Wage event at the New Hampshire Institute of Politics on Thursday, the topic of conversation was a $15 minimum wage. But top of mind was Sen. Maggie Hassan and her opposition to the proposal.

The freshman Granite State senator has largely voted with her party’s progressive majority in the Senate, including on far-left legislation like the H.R. 1 federal election bill and against an amendment to prevent packing the U.S. Supreme Court. However, she’s also broken ranks on occasion, most notably as one of eight Democrats who voted against the $15 federal minimum wage mandate in March.

In a statement at the time, Hassan said, “I’ve long supported raising the minimum wage to $12 an hour and I’m open to $15 an hour. We need a path forward that is appropriate for workers and small businesses and could actually pass.”

She received several shoutouts during Thursday’s event, not all of them enthusiastic.

“The race with Sen. Maggie Hassan could be the one that decides the fate of the Democrats’ control in the U.S. Senate,” said event moderator and MSNBC host Jamal Simmons as he kicked off the event. “In that race, working women voters are going to play the single biggest role in determining the fate of the New Hampshire Senate race. 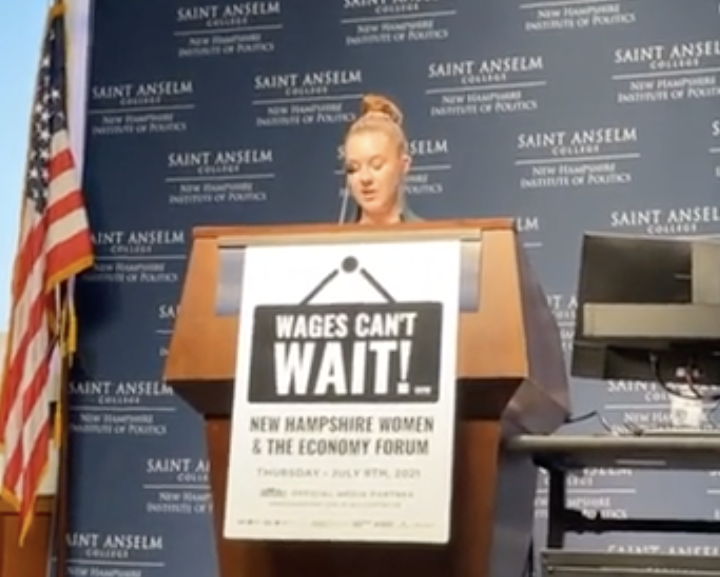 A representative of Sen. Maggie Hassan’s office, identified only as “Mackenzie,” receives chants of “Raise the Wage” as she reads a letter from the Senator to a progressive forum at St. Anselm College on July 8, 2021.

When a representative from Hassan’s office appeared to read a letter from the senator, she left the stage to chants of “raise the wage!” from the crowd.

State Rep. Marie Perez (D-Milford), one of the speakers at the “New Hampshire, Women and the Economy” town hall, told NHJournal she wanted to “make sure Sen. Hassan hears my message. She needs to do the right thing for the people of New Hampshire and not just the 1 percent.”

Perez said she and her supporters campaigned for Sen. Jeanne Shaheen last year and they hoped to do the same for Hassan next year, but only if they believe she’s going to commit to progressive positions like ending the tipped wage in New Hampshire and imposing a federal $15 minimum.

“If we volunteer our time, I want to make sure that if they [Shaheen and Hassan] promise something to the New Hampshire voters, they are going to follow through,” Perez said.

The divide between progressive activists and liberals like Hassan has been growing. On Wednesday, Politico reported that more than 40 progressive groups sent a letter to President Joe Biden and Senate Democrats urging them to prioritize a climate deal with China over human rights abuses and other actions by the Chinese Communist Party government.

“The escalating, bipartisan anti-China rhetoric in both Congress and the White House damages the diplomatic and political relationships needed to move forward boldly and cooperatively,” representatives of some of the nation’s most prominent progressive organizations wrote, complaining that criticism of China over the Uygher genocide and its refusal to cooperate on investigating the origins of the COVID-19 virus “bolsters racist, right-wing movements in the United States.”

Hassan has hardly been outspoken in confronting China, an issue that’s almost certain to get a great deal of attention in the 2022 campaign. Few political professionals believe the stance these progressives urge would be the smartest one during the first post-COVID-19 election next year.

Asked if Hassan had done enough for progressive causes, Perez answered “no.”