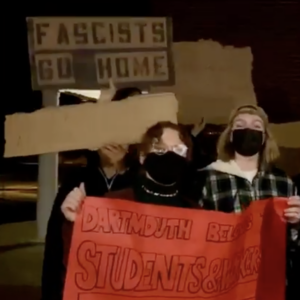 ‘Racist Cops Have Got to Go:’ Dartmouth Progressives Protest Police at GOP Event

But it was a bit surprising when they turned on the lone Hanover Police Officer assigned to provide security.

“Hey Hey, Ho Ho, these racist cops have got to go,” the group of 80 or so protesters chanted outside the Moore Hall building where the GOP event was being held. The chant echoed the #DefundthePolice politics many progressives have embraced.

Police Chief Charlie Dennis said Monday he’s not sure what happened to spark the outrage from the students, but said police did not have any altercation with them.

“I’m not aware of any incident between a protester with us,” Dennis said.

The protestors stayed within their designated area Sunday night, Dennis said, and they kept the protests peaceful.

“They did their little chant and had their posters,” Dennis said.

Dennis said the reaction from the protesters was a little weird. His officer spoke to some of them afterward to see if there was an opportunity to improve police relations.

“We’re always willing to talk to the students and protesters,” he said.

Gabi Rodriguez, with the Dartmouth Democrats Club, said Monday she’s not sure what got the protesters upset with police on Sunday night, but thinks there might have been some lingering ill-will over past political issues.

“I know some community members were frustrated when qualified immunity was protected back in April,” Rodriguez said.

Rodriguez distanced herself from the protestors on Sunday, saying the protest was not a Dartmouth Democrats Club event but was instead organized by the Dartmouth Young Democratic Socialists of America group.

Police reform and qualified immunity were not on the agenda for Sunday night, though. Cawthorn, a controversial North Carolina congressman who pushes the debunked theory that the 2020 election was illegitimate, spoke along with New Hampshire’s Karoline Leavitt, a former communications staffer for President Donald Trump and a candidate in the First Congressional District GOP primary.

Leavitt said Monday she’s glad the protesters were there Sunday night so people can see how the left reacts. She called them “unhinged” and said the way they chanted at police shows their low character.

“I think it speaks to their narrative, they believe they are the party of tolerance, and yet they’re yelling these slurs at police officers.”

Cawthorn’s presence at the event came a day before Rolling Stone Magazine reported he was part of the group that planned the Jan. 6 protest that led to hundreds of Trump supporters swarming into the United States Capitol Building in an effort to stop the certification of the 2020 election. According to Rolling Stone, rioters were told they would get presidential pardons. Leavitt called the report a “hit job.”

Despite the report, Leavitt said the Jan. 6 riots were a peaceful protest that went wrong because of some individual action.

“Jan. 6 was a peaceful protest and there were rioters who caused destruction and violence and they need to be held accountable. They do not represent the America First movement,” Leavitt said.

Rodriguez was not surprised by the Rolling Stone story, saying Cawthorn has been spreading misinformation about the election for months.

“Just last night, he defended his position when asked about the Big Lie, saying relaxed voter ID laws created widespread fraud in places like Wisconsin, which has been proved free and fair,” Rodriguez said.

Leavitt noted that before the Dartmouth appearance she and Cawthorn spoke in front of about 130 supporters in Manchester.

The Dartmouth event already had students on the left and right in an on-campus sign war. Posters were ripped down and vandalized and spoof posters were put up by liberals on campus. It reflects a turn against diversity of speech on campus.

In early 2018, Dartmouth imposed an IT policy prohibiting users from posting or sending “offensive” or “hateful” content. Under pressure from the Foundation for Individual Rights in Education  (FIRE), the school eventually withdrew its policy.

Last month, FIRE put Dartmouth #63 in its ranking of schools based on their campus culture for open discourse and intellectual tolerance. UNH came in number three nationwide.

By Damien Fisher on May 19, 2022
A long-simmering feud between New Hampshire Democrats and progressives flared again this week, and it…
Read More
[IS] Opinions

By David Williams on May 19, 2022
Long-haul truck driver and New Hampshire resident Don Krimpler doesn’t get many days off. But,…
Read More