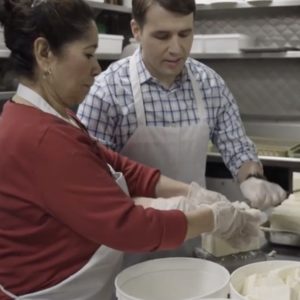 The Puritan Backroom, a popular Manchester restaurant owned by New Hampshire Democrat Rep. Chris Pappas, issued a statement Friday expressing condolences to the family of a man who contracted the norovirus and died — one of 18 people who became ill after visiting the restaurant. However, questions remain as to why the news of the outbreak at their location wasn’t revealed until a month after the incident.

And Rep. Pappas continues to decline repeated requests for comment.

Restaurant co-owner Eric Zink released the statement a day after NHJournal broke the news that a group of patrons became ill from the norovirus after eating at the Pappas family’s restaurant.  The incident occurred on the Sunday before Thanksgiving, but the restaurant never made a public statement at the time. And while WMUR reported that a norovirus outbreak two weeks after the fact, they never revealed the name of the restaurant, only referring to a “function hall.”

According to Manchester Alderman Joseph Kelly Levasseur, 62-year-old John Lewis of Auburn, N.H passed away after his visit to the Puritan Backroom. His obituary is linked here.

The restaurant issued a statement offering condolences while avoiding any acknowledgment that the victim’s death was linked to contracting the norovirus.

“The Manchester Health Department visited the Puritan in response to an event that was hosted in the Conference Center on November 24th.  Of the 46 guests that attended the event, the Health Department told us 18 guests later became ill, including one guest who sadly passed away from unidentified causes. [Emphasis added.] We have communicated our condolences to the family and we express our deepest sympathies in this difficult time.”

In a statement, Beth Daly of the Manchester Health Department reported it this way: “Several individuals tested positive for Norovirus and one person who attended the event later passed away.”

The Puritan Backroom’s statement also points out the finding of the Manchester Health Department  that the outbreak was “due to indeterminate transmission — no ill food handlers or attendees at the time of the event, and no statistically significant food items were identified.”  However, the health department noted in its original report that one of the waitstaff was among those sickened by the virus.

According to the CDC, food service workers are often the source of norovirus outbreaks.

Manchester Health Department records show that the restaurant hasn’t had a mandatory health inspection of the restaurant since January or of the function hall since early February, despite regulations requiring them once every six months.

In a statement to NHJournal, Philip J. Alexakos of the Manchester Health Department said his organization was asked by NH DHHS “to conduct an environmental inspection of the Puritan Backroom.”

“As a result of this assessment and in consultation with the NH DHHS, it was determined that there was no imminent hazard to the public and thus no public notification. Had there been an imminent hazard, immediate action would have been taken.”

But wouldn’t the MHD notice that their department hadn’t conducted a scheduled inspection? Particularly given that the Puritan Backroom restaurant had scored a disturbingly low 84 on its previous inspection in January?

Neither Zink nor representatives of the MHD responded to questions about these issues from NHJournal, and Rep. Chris Pappas isn’t either. And why should they?

They nearly got away with covering up a virus outbreak at a public restaurant that left a man dead.