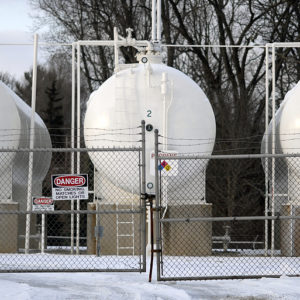 Speculation of a coming propane shortage has been buzzing for months, but Granite Staters using the fuel to keep warm can rest easy; according to David Herr at Blackline Partnerships.

Blackline is a Houston-based energy company that owns the Sea-3 propane hub facility in Newington. Sea-3 has the storage capacity for millions of gallons of liquid propane, and Herr said the company tries to keep supplies at the ready. “We always try and stay on the top side of our tanks.”

New Hampshire residents experienced a propane shortage in 2018 following an extended cold snap which ran down reserves, but Herr said the 2021 winter heating season likely won’t have that problem. While supplies are good this year, the main concerns for Herr and others in the heating industry are the infrastructure for moving the supplies and the labor market. “We know anytime a rail line could go down, or a strike could happen,” Herr noted.

Brilynn Johnson, a representative for propane seller, AmeriGas, said the company has put together its own storage and supply portfolio, including a fleet of tankers, rail cars, and two supply terminals. “AmeriGas is very well-positioned to maintain ample supply for New Hampshire and the entire Northeast,” Johnson said.

New Hampshire’s energy infrastructure lags behind other states when it comes to natural gas, propane, and other liquid petroleum product, largely because of a lack of pipelines in the state to transport the fuels. As a result, more than two-fifths of all New Hampshire households still rely on fuel oil as their primary heating fuel, the second-largest share, after Maine, according to the U.S. Energy Information Administration.

Liberty Utilities’s proposed Granite Bridge pipeline was under constant fire until the company was able to access existing capacity on the Concord Lateral, making the $400 million project unnecessary.

In 2016, Texas energy company Kinder Morgan canceled plans for a 77-mile pipeline that would have gone through Massachusetts and southern New Hampshire to a transport facility in Dracut, Massachusetts.

Propane is currently one of the more expensive heating sources in the Granite State. According to the New Hampshire Office of Strategic Initiatives, home heating oil is currently averaging $2.36 per gallon while propane comes in at $3.09 a gallon.

Propane is captured during the production of natural gas, or the crude oil refinery process, and is produced at extraction sites and refineries throughout the United States and Canada.

Johnson said propane pricing is typically set by the liquid petroleum gas market located in Mont Belvieu, Texas, and the market has placed a premium on domestic propane as it is being primed for export to Asia. Mont Belvieu is home to the country’s largest underground liquid petroleum storage facility, and prices set in Mont Belvieu are reported daily to the United States Energy Administration.

With Asia’s markets bouncing back from the COVID-19 pandemic, more and more of the fuel is headed out of the U.S., Johnson said. Propane is seen as a less carbon-intense fuel than heating oil, making it a prized commodity overseas, according to Johnson. That leaves American customers paying more for their propane.

“Mont Belvieu is pricing itself to the export market and that is being driven by Asia’s rapid recovery response to Covid-19,” Johnson said.

Herr said there’s nothing for New Hampshire customers to worry about when it comes to heating, though.

“We at Blackline have our customers completely covered,” he said.