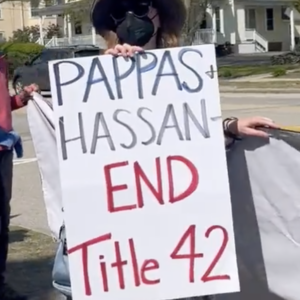 Granite State progressives, armed with banners, signs, and even trombones, protested outside U.S. Rep. Chris Pappas’ Dover office, angry over his support for a Trump-era border policy that makes it easier to turn away would-be migrants.

“Hey, Pappas! We vote for you. End Title 42,” they chanted, waving signs calling out both Pappas and U.S. Sen. Maggie Hassan, both of whom have drastically shifted their stances on illegal immigration as the midterm elections approach.

After years of opposing Trump’s border wall and supporting amnesty for illegals, both now embrace Trump’s strategy of using Title 42 — a public health order from the CDC unrelated to overall immigration policy — to block immigration.

Thursday’s protest was organized by traditional Democratic Party allies like the American Friends Service Committee and the Granite State Interfaith Action Fund, among others.

“Hey Pappas, we vote for you. #EndTitle42!” @RepChrisPappas @SenatorHassan it’s time to listen to NHers and build a strong immigration system that does not discriminate! #NHPolitics #CommunitiesNotCages pic.twitter.com/KBewZ2AaXn

“Tell Congressman Pappas and Sen. Hassan to stop discrimination and undermining the human rights of migrants and unblock asylum at the border,” organizers said in a flyer promoting the event. “Listen to NH immigrant communities and stand with us.”

But, Granite State immigrant advocates say, the vulnerable Democrats have ignored repeated requests for dialogue over the border issue. Instead, Hassan traveled to the southern border to stand in front of a border wall whose funding she voted against, and filmed a campaign video touting her support for “physical barriers at the border,” aka “a border wall.”

Immigrant rights activists like Eva Castillo of the Mira Coalition and state Rep. Maria Perez (D-Milford) have explicitly called the policy backed by Pappas and Hassan “racist.” The anger is so high, a group of Hispanic Democrats quit the New Hampshire Democratic Party over the issue.

“Sen. Hassan and Congressman Pappas must prioritize solutions rooted in compassion and humanity; shelter not detention; service personnel not agents,” said Grace Kindeke, program coordinator for the American Friends Service Committee. She noted America is “welcoming our Ukrainian siblings to safety. We must ensure that the same system is available to welcome all people, regardless of where they were born, the color of their skin, their culture or religion.”

Polls consistently show Granite State voters are unhappy with the performance of Hassan and Pappas. They also show that immigration is an important issue for independent and Republican voters, who — also according to the polls — don’t trust Democrats to handle it.

The Biden administration has certainly struggled. As the Center for Immigration Studies reports, “According to an April filing in Texas v. Biden, CBP encountered 221,303 illegal migrants at the Southwest border last month, bringing total encounters there to just fewer than 1.06 million for just the first half of FY 2022. Worse, DHS released more than 80,000 of those migrants into the interior last month, raising the total number of migrant illegal releases under the Biden administration to 836,225.”

Republicans believe border security is a winning issue. While progressives were protesting Pappas for saying he supports Title 42, Republicans attacked him for refusing to do his part to bring the policy to the floor of the House for a vote.

Republicans are seven votes shy of the number needed to force a vote on Title 42 in the House via a discharge petition. One of the seven “missing” signatures? Pappas, who says he supports a Title 42 mandate but refuses to sign.

“Which side are you on, Rep. Pappas and Sen. Hassan?” asked Concord-based activist Lidia Yen via Twitter Thursday.

Based on the available information, it is a good question.

As for the protest chant at Pappas’ office, Asma Elhuni, an outspoken progressive organizer, offered a small but significant modification in her Twitter feed Thursday: “We *voted for you.”