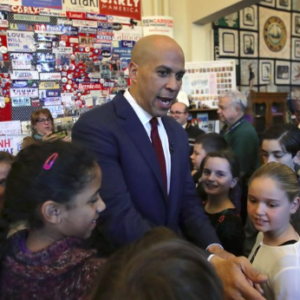 The debate over whether New Hampshire is “too white” began in earnest when none of the African American/Latino candidates in the POTUS primary field qualified for the sixth national debate, scheduled for Thursday in California. It has now boiled over into explicit denunciations of white Democrats in Iowa and New Hampshire by progressive Democrats who blame “systemic racism” for keeping candidates like Sen. Cory Booker and former HUD Secretary Julian Castro off the stage.

Keeping these candidates of color out of the latest debate “didn’t just happen,” Rep. Barbara Lee (D-Calif.), past chair of the Congressional Black Caucus, told Politico. “Systemic racism permeates everything in this country. I think Democrats are doing some soul-searching right now. I don’t know if white Democrats are really stepping up and looking at how the system is biased and prevents others from coming through.”

“New Hampshire and Iowa are a big problem,” Dean said.

“New Hampshire’s new law making it more difficult for students to vote by requiring a state ID is an  embarrassment,” he said. “Already lacking in racial diversity, the state is now limiting young people from casting votes.

“It’s an embarrassment to the Democrats who stand up for the right to vote, having our first primary there,” Dean said. “They’re going to be toast sooner rather than later.”

These are strong words directed at New Hampshire’s rank-and-file Democrats. And yet, not a single one of the elected Democrats they helped put into office — Sens. Maggie Hassan and Jeanne Shaheen, and Reps. Annie Kuster and Chris Pappas — has spoken publicly in their defense. Do these NH Democratic leaders agree that their own voters are racist?

Democratic pros point out that the only candidate of color currently campaigning in New Hampshire is late-arrival Deval Patrick, former governor of neighboring Massachusetts. Castro announced weeks ago that he was abandoning the Granite State, and Booker’s struggling campaign is withdrawing resources here, too.

NH Democratic Party chairman Ray Buckley has spoken out on behalf of his state’s voters, insisting that the struggles of candidates of color like Castro are a consequence of their campaigns, not the character of New Hampshire Democrats.

“I can imagine he is frustrated but blaming his campaign’s challenges on the voters of Iowa and NH is a bit much,” Buckley said of Castro’s complaints.

The consensus is clear: Democrats agree that New Hampshire voters are racists. They’re only debating over which ones.