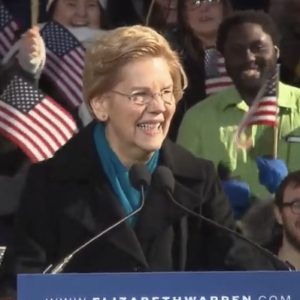 Just minutes after she formally announced her candidacy on Saturday, a national progressive group endorsed Sen. Elizabeth Warren as “the best candidate to defeat Donald Trump in 2020.”

Adam Green, co-founder of the Progressive Change Campaign Committee, told NHJournal that while they believe Warren has solid progressive credentials and “will always be on the side of the voters against powerful interests,” the primary reason his group is backing her is electability.

“Trump won in 2016 in part by bashing Wall Street and pretending he would clean up corruption,” Green said  “We need someone who is authentically seen as on the side of working people, challenging corruption and corporate interests. And that’s Elizabeth Warren’s brand.”

Green, whose organization claims one million members and encouraged Warren to make her first US Senate run in 2012, rejects the argument that “authenticity” is a problem for Warren despite the ongoing Native American issue. Last week, the Washington Post released a public document from 1986 showing Warren claiming to be an “American Indian” in her own hand.

“I think this is a pundit’s issue, not a people’s one. If we’re in the general election, and voters are at their kitchen table talking about the high cost of college, and their medical bills, and how companies are ripping them off and the political system is corrupt;  And Elizabeth Warren is talking about those issues while Donald Trump is yapping about forms where she checked a box– only one of those candidates will be speaking to the needs of voters,” Green said.

The PCCC endorsement comes both very early in the cycle– big-name candidates like Sen. Bernie Sanders and former Vice President Joe Biden have yet to even announce their decisions about running– and at an opportune moment for Senator Warren, whose candidacy has been struggling for months.

Green argues that Warren’s record of supporting aggressively-progressive policies like single-payer healthcare and income redistribution give her an advantage in the crowded field of candidates from the Left.  “People ask me ‘don’t all the candidates support Medicare For All?’ And yes, we’ve seen  kind of a catch-up dynamic, with all the candidates running to check the box on various issues,” Green says. “But there’s a difference between checking a box, and having a world view where you’re instinctively on the side of regular people, where  voters know you will always be on their side every single time.”

Perhaps, but that advantage has yet to appear in the data. In straw polls of other progressive groups like MoveOn.org and Democracy for America, Warren has fared poorly. Despite her high name ID and liberal legacy, she trailed well behind Bernie Sanders, Joe Biden and former Texas congressman Beto O’Rourke.  She’s currently in fifth place in the latest Real Clear Politics poll average.

And none of this factors in the impact of the latest revelations regarding her claims to be an American Indian, a storyline that some Democratic strategists believe could seriously set back her candidacy.

Green, whose organization coined the phrase ‘The Elizabeth Warren Wing of the Democratic Party” during the 2014 campaign, isn’t worried.  He points to polling released by PCCC showing that New Hampshire primary voters want a combative progressive like Warren to represent their party. Among their findings:

“Many of the debates are not Left versus Right, they’re old versus new.  Or inside versus outside. And new and outside is where the people are, and that’s exactly where Elizabeth Warren is, too.” Green said.