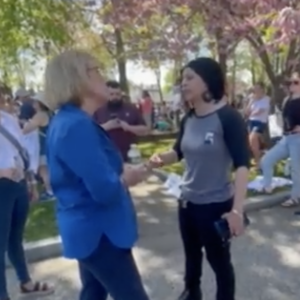 A new video shows U.S. Senator Maggie Hassan being confronted by a progressive activist over her decision to embrace Title 42, a policy imposed by President Trump to turn away would-be migrants at the southern border.

Thread: 1/4 This weekend @SenatorHassan claimed to have talked to asylum seeking families at the border, but still won’t remove her cosponsorship of an amendment that blocks the right to seek asylum #NHPolitics #NHSen #WeAreHome pic.twitter.com/eCG5EMmhzj

“We want to know why you’re sponsoring a racist amendment, Title 42, when you know it’s going to impact brown and Black families,” demanded progressive activist Asma Elhuni. “This is something that Trump supported. A majority of Democrats, including Joe Biden, have said they want to remove it.”

Title 42 allows border officials to expedite the removal of would-be undocumented migrants due to a health emergency — in this case, the COVID-19 pandemic — forcing them to go back to Mexico or their home country.

Noting the CDC has called for Title 42 to be ended, Elhuni accused Hassan of “ignoring the science” by supporting the policy.

“Why would you support something racist– and you call yourself a Democrat,” Elhuni added.

“The Title 42 expulsion policy is illegal and violates the human rights of those subjected to it,” Human Rights Watch says on its website.

Hassan responded by telling the young activist she didn’t know what she was talking about.

The video was posted by Linds Jakows, who calls herself an organizer with the Granite State Interfaith Action Fund. That’s the same group that organized a loud, trombone-infused protest outside Rep. Chris Pappas’ Dover office last week. Pappas has also reversed his border stance and now supports keeping Title 42 in place.

“Much love and solidarity with Asma Elhuni for speaking truth to power,” Jakows tweeted.

She wasn’t the only progressive happy to see Hassan confronted over her border policy.

“If there’s one thing about Asma Elhuni, she’s gonna say what needs to be said,” tweeted Ronelle Tshiela, a local Black Lives Matter organizer. And, she added in a message to Hassan,” ‘You’re not interested in hearing my side,’ your constituents are literally telling you that your side is sh*tty, you work for U.S.”

On social media, Elhuni repeated her frustration, heard from both political activists and average constituents, that Hassan is hard to reach and unwilling to talk about their concerns. Local Hispanic activists have been requesting such a meeting for weeks.

“She does not want to meet with people she represents,” Elhuni said of Biden. “She’s been incredibly problematic and racist with her sponsorship of amendments like title 42. She refuses to meet with her constituents and only sends her staff. She needs to stop using fear and hate to win votes.”

So why are Hassan and Pappas embracing the Trump-era border policy hated by so many of their fellow Democrats? It could be linked to the latest news from the border: “There were 234,088 migrants encountered at the Southern border in April, per a DHS court filing today. That’s the highest number in DHS history.

Hassan sits on the Homeland Security Committee which oversees border policy. She supports amnesty for all illegal immigrants in the U.S. who have not committed any serious crimes, and she opposes deporting people found in the interior U.S. for being here illegally. This puts her at odds with most independent and Republican voters. A new FiveThirtyEight poll finds immigration is among the top concerns of independent voters, who care about it twice as much as Democrats.