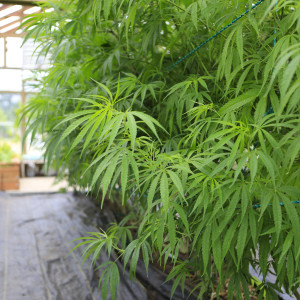 The recent decriminalization of possession of marijuana in New Hampshire was long sought by advocates who are already focusing on what’s next.

Gov. Chris Sununu signed HB 640 into law on July 18, which decriminalizes possession of up to three-quarters of an ounce of marijuana. Possession was formerly a misdemeanor, carrying a penalty of up to one year in prison and a fine of up to $2,000.

Now, those charged with possession face a civil violation, and a $100 fine for the first two offenses, a $300 fine for a third offense within three years of the first. A fourth offense could be charged as a class B misdemeanor, but there would be no arrest or possibility of jail time.

The law was first introduced by Rep. Robert “Renny” Cushing, D-Hampton, and will go into effect on Sept. 16, making New Hampshire the last state in New England to decriminalize possession of marijuana.

Matt Simon, the New England Political Director of the Marijuana Policy Project, has been working on issues surrounding cannabis in the Granite State since 2007. In an interview with NH Journal, Simon said the House of Representatives passed a bill decriminalizing possession every year since 2008 but faced opposition from the 24-member Senate and two former governors: John Lynch and Maggie Hassan.

Lynch vetoed two bills that would have legalized medical marijuana before Hassan signed such a bill into law in 2013—albeit with heavy restrictions. While governor, Hassan did not support the decriminalization effort and threatened to veto such legislation had it arrived at her desk. Simon said Sununu was consistent in his support of “common sense reform” during last year’s campaign and let the issue be debated in the legislature before signing it.

“It’s the least that New Hampshire needed to do in 2017,” Simon said. “This will dramatically reduce arrests and now police will have more time to work on things people care about them doing.”

According to the FBI Uniform Crime Report data for 2015, there were 4,675 total marijuana-related arrests in New Hampshire, including 3,676 arrests for possession. Simon said he expects possession arrests to decline by 80 percent, citing a similar statistical trend when Vermont decriminalized marijuana in 2013.

Public opinion has been a crucial factor in the debate. A recent University of New Hampshire poll found 68 percent of state residents support legalizing recreational marijuana and 24 percent are opposed.

Devon Chaffee, Executive Director of the New Hampshire chapter of the American Civil Liberties Union (ACLU), said in an interview with NH Journal that residents have noticed the actions taken by Maine and Massachusetts, where voters chose to legalize marijuana in recent ballot referendums. This legislative process does not exist in New Hampshire, meaning that Chaffee, Simon, and other advocates had to make their appeals for change directly to state legislators.

“What we’re seeing is a statewide and nationwide change in perspective on the possession of marijuana, where people don’t want taxpayer money going to fight this,” Chaffee said.

According to a 2013 ACLU study, New Hampshire spent $6.5 million in one year on enforcing marijuana possession laws.

Chaffee cited the bill’s uniformity on punishment as one of its strongest aspects. By redefining possession as a violation, Chaffee said individuals will be free from arrest and potential overnights in jail if they can’t make bail. She said this ensures the poor won’t be exploited by the policy and that “the penalty matches the offense.”

“People have seen the way the government has treated the opioid crisis as a public health issue by focusing on investment and prevention much more than as a criminal justice issue,” Chaffee said. “Decriminalization is very much in line with that type of approach.”

While advocates achieved decriminalization, they acknowledge there are still potential obstacles ahead on the path to legalization.

Recently, advocates urged Sununu to veto HB 215, a bill intended to study the potential benefits and disadvantages of legalizing marijuana. In the original version of the bill, representatives from MPP and the ACLU were intended to sit on the commission. However, both were dropped from the Senate’s version of the legislation, which Sununu signed the same day as the decriminalization bill.

Simon said he is not expecting MPP to get placed back on commission, but added that the governor and House Speaker are being encouraged to choose members who are “open-minded and balanced.” Simon stated he did not expect the report to result in a recommendation for legalizing marijuana.

Chaffee said it will be “interesting to see where New Hampshire goes from here,” noting that people will learn more about what potential legalization could look like from watching their neighbors. Chaffee added that Maine and Massachusetts could influence New Hampshire’s policies based on how both states implement their respective tax and regulatory structures for legalized marijuana.