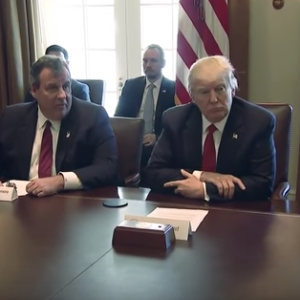 President Donald Trump declared the ongoing opioid crisis a national public health emergency on Thursday, after months of speculation and debate over how to address the epidemic.

The opioid crisis is a subject Trump focused on throughout the 2016 presidential campaign and after taking office. In March, Trump signed an executive order establishing the Commission on Combating Drug Addiction and the Opioid Crisis, which is headed by Gov. Chris Christie, R-N.J.

In August, the commission issued an interim report which recommended Trump declare the opioid crisis a national emergency under either the Public Health Service Act or the Stafford Act. The commission’s final report will feature recommendations to be delivered to the president next week.

The opioid epidemic killed 64,000 Americans in 2016, prompting Trump to call it the “worst drug crisis in our nation’s history.”

Trump’s declaration, however, does not make additional federal funding available to address the opioid crisis. A study from October 2016 by Curtis Florence, PhD, and the National Center for Injury Prevention and Control estimated the cost of combating the opioid crisis at $78.5 billion.

The current budget for the Public Health Emergency Fund is $57,000. A move for supplementary funding is expected to be a part of an end-of-the-year budget deal, which the Trump administration will have to negotiate with leaders on Capitol Hill.

The president debated invoking a disaster emergency under the Stafford Act, which would have made FEMA’s Disaster Relief Fund available for governors who declared the opioid crisis a disaster situation. Six states have declared opioid-related public health or disaster emergencies. The legislation reduces the barriers to access $4.28 billion, which the federal government made available in the wake of Hurricanes Harvey and Irma.

Trump acknowledged the effort to combat the opioid crisis will likely take years or decades but said, “We are going to overcome addiction in America.” In addition to the declaration of public health emergency, Trump said the government will be taking steps to attack the complexities of the opioid epidemic.

Trump said the Department of Homeland Security and United States Postal Service have enhanced their investigation methods for imports of fentanyl, which is 50 times more deadly than heroin. The Department of Justice has continued to prosecute drug traffickers supplying fentanyl. Trump also announced National Prescription Drug Take Back Day will be held on Saturday, which is sponsored by the Drug Enforcement Agency.

The National Institutes of Health is launching a public-private partnership to research and develop non-addictive painkillers. The president also encouraged companies to follow the lead of CVS, which announced last month that it would limit prescription doses to seven days.

Towards the end of his speech, Trump acknowledged Manchester Fire Chief Dan Goonan, whose program “Safe Station” had assisted over 350 Granite Staters suffering from addiction begin the recovery process. Two other Granite State leaders, Republican Gov. Chris Sununu and Democratic Sen. Jeanne Shaheen, were in attendance at the White House for the announcement.

Sununu issued a press statement following the announcement, in which he praised Trump’s efforts as the first president to declare the opioid crisis a public health emergency.

“The President has been focused on addressing the opioid issue since taking office and today’s declaration further underscores his recognition of the severity of this issue,” the statement read. “I hope Congress will follow the President’s ‘call to action’ and respond in kind by working through the barriers that prevent the fast and efficient flow of funds to communities that need the most help. Those impacted the most, like New Hampshire, are on the front lines of this crisis and assistance should be proportionate to the size of our problem and not based on our population. I am hopeful that today’s announcement will also signal an ease in regulations so that New Hampshire has the flexibility needed to innovate and better target the Addiction Services funds that we are currently receiving into areas of the highest need.”

On Wednesday, Shaheen and Sen. Maggie Hassan, D-N.H., unveiled legislation which would invest $45 billion to combat the opioid crisis and called on Trump to direct the government to negotiate lower prices of naloxone, an opioid overdose reversal drug used by first responders.