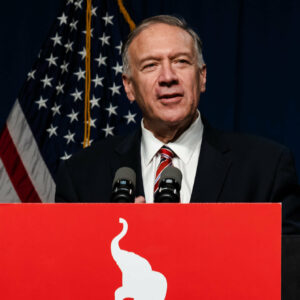 Pompeo Brings ‘An America Worth Fighting For’ Message to New Hampshire

Former Secretary of State Mike Pompeo told NHJournal his message at Tuesday morning’s Politics and Eggs breakfast will be simple and direct.

“I’m going to focus on the reasons America is worth fighting for, and why I’m staying in the fight.”

It is the sort of message a Republican candidate for president might bring to New Hampshire’s “First in the Nation” primary. And Pompeo is widely believed to be considering such a run, a belief bolstered by his recent trips to the Granite State — including his appearance at the breakfast event hosted by the New England Council and the New Hampshire Institute of Politics.

Like many Republicans on the “potential candidate” list, Pompeo shrugs off questions about 2024 by saying the focus needs to be on the upcoming midterms. And, he said, President Joe Biden’s policy failures at home and abroad are being felt by voters right now.

“Farmers in my home state of Kansas are going to pay an awful lot [more] for fertilizer. Now every family is going to have to pay more, because of higher prices for natural gas,” Pompeo said. “There is a reason that deterrents was the right policy for the Trump administration and why losing that deterrence has harmed American families from New Hampshire to California.”

Pompeo was elected to Congress in the 2010 Tea Party wave, serving three terms before President Donald Trump tapped him as CIA director. From there he became secretary of state, winning generally positive reviews from his fellow Republicans.

His review of Biden’s performance is less than stellar. Asked about Biden announcing on CBS Sunday night that he would send U.S. troops to Taiwan to fight off a Chinese invasion, Pompeo laughed.

“It sounds like his national security team had to be picked up off the floor [afterward] because they immediately called “60 Minutes” and said, ‘No, our boss was wrong,'” Pompeo said.

“That’s one of the tragedies of how President Biden has run our foreign policy: Nobody knows what America’s commitment is today to any place in the world. Our friends know that and they are hedging their bets, and at the same time our adversaries feel much freer to move about the cabin today.”

On Monday, Customs and Border Patrol announced that, for the first time ever, migrant encounters at the U.S. southern border have surpassed 2 million in one year. Pompeo described the Biden policy as “both nutty and dangerous.”

The lawlessness at the border “absolutely demonstrates American weakness,” Pompeo said. “There’s no other country in the world that would permit that.

“Republicans sometimes get castigated by the left, accused of being racist, or not caring about these people. But the truth is we are the most generous nation in the history of the world. We welcome people through our lawful migration system in huge numbers. No other nation in the world would allow this many people to violate the law and then welcome them inside the country. It is both nutty and dangerous.”

And Pompeo dismissed the overwrought reaction to 50 migrants flown to nearby Martha’s Vineyard by his potential 2024 opponent, Gov. Ron DeSantis (R-Fla.). “Really? Fifty people? That’s the southern border every hour.”

The Politics and Eggs breakfast is a must-stop on the presidential campaign trail across New Hampshire. Both former Vice President Mike Pence and 2016 candidate Chris Christie already have spoken this year.

New Hampshire GOP political guru Tom Rath sees Pompeo as a 2024 “non-starter” if Trump runs. And, Rath says, “I doubt foreign policy will loom large” in the next presidential election. “It might be enough to differentiate him in a multi-candidate field, but I doubt it could be decisive.”

Based on his comments to NHJournal, Pompeo plans to use his speech at St. Anselm College Tuesday morning to expand his message beyond his foreign policy resume.

Politico reported that last week Pompeo told a crowd in Chicago he is “doing the things one would do to get ready” to run for president. “We’ve got a team in Iowa, a team in New Hampshire, and South Carolina. And that’s not random.”

However, Pompeo added, “Unlike others, if I go down an escalator, no one will notice.”