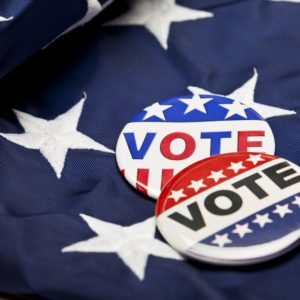 Poll: Voters in Both Parties Pumped up for Midterms

A new Morning Consult poll asks voters across the political spectrum how passionate they are about voting in November’s midterm. Answer: Very.

“More than eight in ten voters (83 percent) say they are motivated to vote in the upcoming midterms,” Morning Consult reports. That’s up from three-fourths (76 percent) who said they were and 72 percent said the same last December.

The “Very Likely to Vote” number is high on both sides of the aisle:

But talking about voting isn’t the same as showing up. What’s turn out been like in the 2018 primaries?

According to Pew Research, it’s way up:

“Turnout has surged in the 31 states that held their congressional primaries as of July 27th– particularly among Democrats,” they report.  “In those states, nearly 13.6 million people – or 10.1% of registered voters – have voted in Democratic primaries for the U.S. House of Representatives. By the same point in the 2014 midterm election cycle, fewer than 7.4 million people – or 6% of registered voters – had cast ballots in Democratic House primaries.”

Is the high turnout for Democrats as sign that they are more motivated than Republicans? Perhaps. But as Pew notes, there have also been more Democratic primaries with more candidates running in them. More candidates tend to drive up turnout.

For example, 10 incumbent Democratic senators in states carried by Trump have inspired a series of competitive GOP primaries among Republican challengers.  Check out the partisan turnout increase in the Senate vs other races: 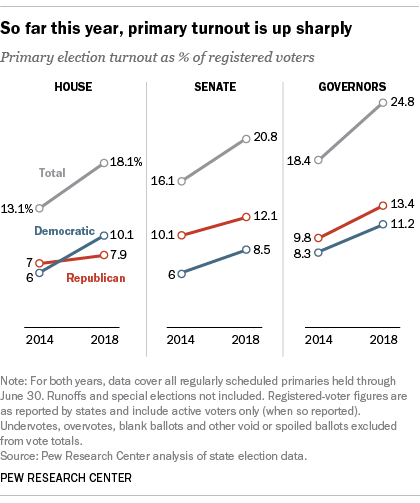 In New Hampshire, these trends bode well for Democrats running for Congress–including the hotly-contested NH-01 race; and for incumbent GOP Governor Chris Sununu, who needs the GOP base to turn out and come close to matching the Democrats to help him ride the likely “blue wave.”