We find the 2018 campaign looks like a toss-up contest for control at the moment, as the Democrats would most likely get 219 seats if the election were today (just one more than the 218 needed for a majority) and the Republicans 216. With a margin of error of nine seats on the model, control is totally up for grabs.

In other words, the Democrats’ margin is so slim that whether or not Nancy Pelosi becomes Speaker of the House could come down to the Granite State’s two house seats, both of which are in play. Is it possible Pelosi’s speakership bid could hit a Granite State wall?

As NHJournal has reported, the generic-ballot margin has been tightening and analysts at Cook Political Report have recently shifted their predictions towards the GOP. Both are on their list of competitive races: NH-01 is ranked as “leans Democrat” and NH-02 is “likely Democrat.”  The University of Virginia’s Larry Sabato also has NH-01 as a “leans Democrat”—not surprising given the fact that President Trump won the district (48-46%)  in 2016.

According to the CBS analysis, a key part of the Democrats’ advantage is turnout motivation.  Their poll finds that both Republicans and Democrats in these battleground districts like NH-01/02 believe that voting in November is as important as voting in a presidential election.

“But Democrats (28 percent) are twice as likely as Republicans (14 percent) to say their midterm vote is more important than in a presidential election.” (Emphasis added) 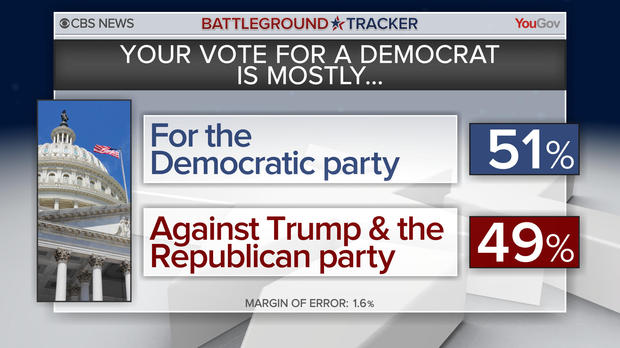 The engine of that motivation is the anti-Trump passion of Democratic voters—almost half say they’re voting against President Trump rather than for the Democratic Party.  Which means that the more Trump’s numbers improve, the fewer voters will fall into this category.  President Trump narrowly lost New Hampshire in 2016 and his approval has recently improved. If Trump can continue to make gains, the number of anti-Trump voters could decline and give Republicans a shot at one or both of the Granite State seats.

Democrats could do the Republican a favor by nominating a candidate in NH-01 who is to the left of this swing district’s voters. The GOP could give Democrats a boost by picking a candidate without the talent and resources to mount winning bid.  With the generic ballot margin down to about three points, the political skills of individual candidates matter more than usual.

Democrats still have the advantage—and if midterm-election history is any indication, it’s a big one. But if recent polling is capturing the mood of midterm voters, it’s possible Nancy Pelosi could wake up on November 8th and say “If we’d only held New Hampshire…”