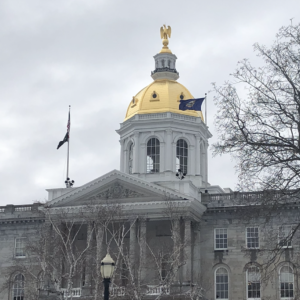 In its final ratings before November’s elections, the University of Virginia’s Center for Politics said the odds Democrats will flip the New Hampshire House have improved, moving it from a “Likely R” to a “Leans R” rating.

The Center is home of “Sabato’s Crystal Ball,” edited by respected political analyst Larry J. Sabato. It analyzes races from the White House to local state houses. And while the national momentum appears to be shifting in the GOP’s favor, its new handicapping moves five legislative chambers in the Democrats’ direction and two toward Republicans.

Lou Jacobson, who covers the state legislative races for the Center, said the Granite State GOP is still likely to hold the state Senate on election night. And the GOP is still favored in the House, too. But, he adds, “Compared to our prior handicapping, Democrats have become more optimistic in New Hampshire, due to a combination of abortion-rights energy and the nomination of Trump-aligned candidates for U.S. House and Senate contests. Gov. Chris Sununu (R), while still a heavy favorite to win reelection, is expected to see somewhat eroded margins compared to 2020, which could have some down-ballot impact for the GOP.

“Of the two chambers, the state’s enormous House chamber is more likely to flip, given its history of large partisan swings, so we’re moving it to Leans Republican. But taking control of either chamber remains a longshot for Democrats, given a favorable redistricting crafted by the GOP.”

Republican leaders say, despite the analysis, they think they can hold the House.

The other four chambers the Center moved toward the Democrats are the Arizona state House and Senate, and the House in Michigan and Pennsylvania.

New Hampshire was the only state to flip both the House and Senate from Democratic to Republican control in 2020, and they did it despite Joe Biden’s nearly eight-point win over President Donald Trump. With momentum appearing to build for Republicans nationwide, why would UVA say the odds are moving in the Democrats’ favor?

Jacobson acknowledged Republicans hold the advantage. “It still leans Republican in my ratings,” he told NHJournal. But, he added, the political situation in the post-Dobbs environment is still uncertain.

“There is a history of large swings in the New Hampshire House, including some unexpected ones. If there’s a backlash to some of the GOP nominees chosen for federal offices, the House is where reverberations could be felt.”

Still, with national polls showing Republicans have a 10-point advantage in voter enthusiasm, losing control of the House in that environment would be quite a shock.

“Bottom line: ‘Lean Republican’ means that it’s expected that the GOP will retain control in the chamber, but a flip or substantial gains for the out-party are not out of the question,” Jacobson said.