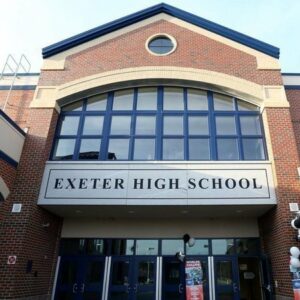 In a petition that is being distributed in the SAU 16 community, parents Susan Shanelaris and Melissa Hanlon say administrators are not planning to return to full-time, in-person learning at the middle or high school this academic year.

They worry hybrid learning will continue into the 2021-2022 academic year.

Shanelaris, who has children in sixth and seventh grade, said during a phone interview on Thursday that she and her husband decided to homeschool their children this academic year to accommodate their work schedules.

She is concerned school officials are continuously moving the goalposts for returning to in-person learning, which affects all the middle and high schoolers in the district, as well as their families.

“It’s never been communicated very clearly where the goalposts are,” Shanelaris said. “Rather than finding a way, we’re finding excuses.”

After a meeting on Monday, Shanelaris realized the district will not open the middle or high school until officials at the U.S. Centers for Disease Control and Prevention drop the six-foot physical distancing recommendation as outlined in their new guidance for school re-openings.

Shanelaris and Hanlon point out guidance from the NH Department of Education says students should be spaced “at least three feet apart with a goal of attempting to get chairs/desks six feet apart.”

Hanlon, who has children in sixth and eighth grade participating in hybrid learning, said she does not suggest school officials ignore evidence-based science but argues they are not compelled to abide by the new federal guidelines, which are designed as a model for all 50 states.

“These are just guidelines. They can be followed or ignored. They’re not law,” Hanlon said.

State Epidemiologist Benjamin Chan said in a statement on Wednesday they will not be implementing the CDC’s new educational phased mitigation guidance and suggested testing strategy as it would place unnecessary barriers to in-person learning in New Hampshire.

Another identified barrier for the middle and high school reopening at SAU 16 is vaccinations for teachers and staff members. The CDC suggests offering vaccinations when they become available to this population, but does not require them for in-person learning.

Teachers and staff members in New Hampshire will be eligible for vaccination in April if the rollout goes as scheduled.

Sununu said during his press briefing on Thursday afternoon he would likely sign the order requiring all schools to be open for in-person learning at least two days a week on Friday.

“It isn’t just so the kids come back and have a fuller, more robust learning model. It really is for the behavioral and mental health, the isolation issues that so many of our students have been bearing with,” Sununu said.

Sununu said there are kids in emergency rooms waiting for a bed to get evaluated and work through the community mental health system. He said there is no doubt that the mental health of youth has been affected by COVID-19 and in-person learning will help alleviate the problem.

“We’re going to be dealing with COVID and high numbers of COVID cases for years. I really believe that. I hope not, but I believe it. I think this is something we’re all going to have to manage through,” Sununu said.

Manchester, Nashua, Concord, Derry, and Dover – communities that have the highest populations in the state – are currently using hybrid models of learning.

David Ryan, superintendent of SAU 16, did not return phone messages left for him on Thursday.

As of Thursday evening, 242 people had signed the petition by Shanelaris and Hanlon on Change.org.

The petition can be found here.