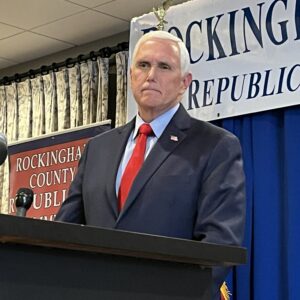 He may have been campaigning in one of the most pro-choice states, governed by a pro-choice GOP governor, but former Vice President Mike Pence did not hold back on his old-time religion Republicanism while on the Granite State stump Thursday.

Pence took Frost’s advice to heart. At every appearance during his day in New Hampshire, the likely 2024 presidential candidate reminded the GOP crowds that, “I’m a Christian, a conservative and a Republican — and in that order.” 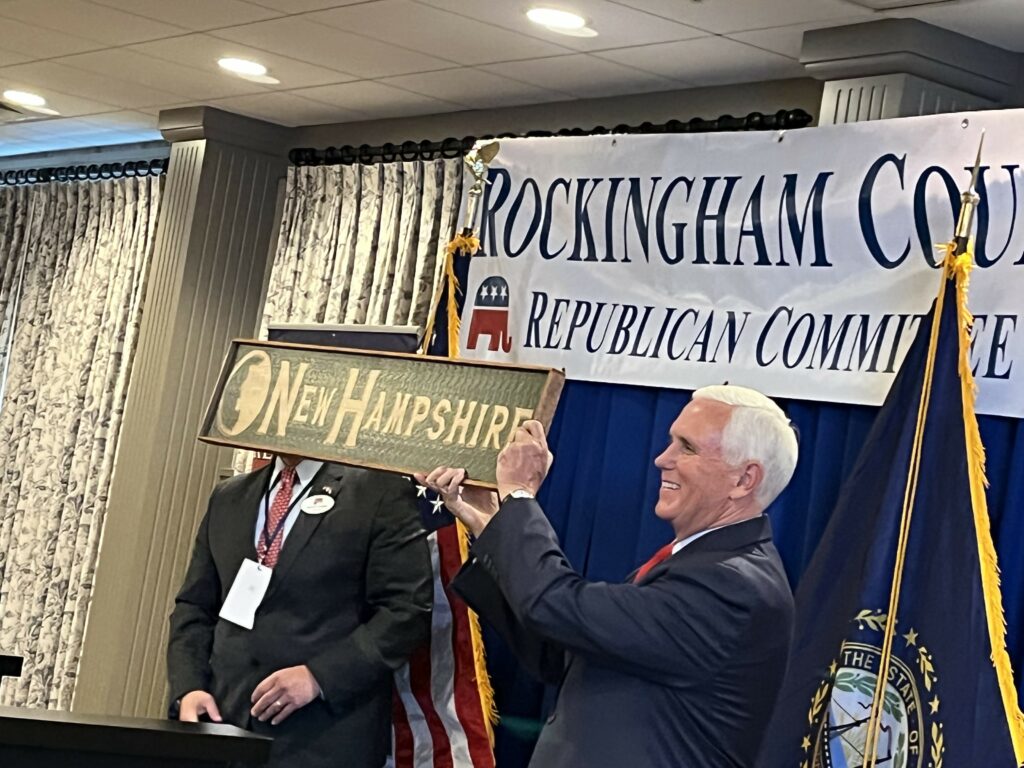 Former Vice President Mike Pence receives a gift from the Rockingham County GOP after speaking at their Freedom Founders Dinner in late May, 2022.

He then laid out what he sees as the accomplishments of the “Trump/Pence administration.”

“In the 48 months after the 2016 election, the Trump/Pence administration achieved the lowest unemployment, the highest household income, the most energy production, the most pro-American trade deals, the most secure border, and the strongest military in the history of the world,” Pence said. “We created seven million jobs, cut taxes and regulations, and became a net energy exporter for the first time, and we reduced illegal immigration by 90 percent.”

And while New Hampshire Republicans have tended to shy away from the upcoming Supreme Court ruling, many expect to overturn Roe v. Wade — Gov. Chris Sununu has said he wants Roe to stay in place — Pence embraced it as a high point of the Trump presidency.

“I couldn’t be more proud to have been vice president in the most pro-life administration in America’s history,” Pence said, listing the three conservative justices appointed to the Supreme Court by President Trump.

“You all saw the news: If the draft opinion that was leaked from the Supreme Court is correct, we may well be on the verge of a new era in the cause of life,” Pence said. He then asked the audience to “pray for our justices, to give them the courage of their convictions so that draft opinion will become the majority opinion and we can send Roe v. Wade to the ash heap of history.”

Pence played the “faith and family” card hard, despite the fact that social conservatives like Sen. Rick Santorum (R-Pa.) and the Rev. Pat Robertson have not fared well in the Granite State. No Republican from what one Rockingham County Republican referred to as the “Ovide Lamontagne” wing of the GOP has ever won the First in the Nation presidential primary. (Lamontagne, a popular Republican who performed well in three statewide primaries, never won a general election.)

Still, he was well received by the Rockingham County crowd, and county GOP chair Jason B. Grosky told NHJournal Pence made the event a success.

And Pence’s outspoken advocacy of pro-life politics and religion in the public square? “There are more social conservatives in Rockingham County than most people think,” Grosky said.

Pence also refused to back away from his support for the Second Amendment in the wake of the school shooting in Uvalde, Texas that left 21 people dead — including 19 children.

Pence began his remarks with expressions of sorrow over the loss of life, but we quickly turned to politics, accusing President Biden and gun control advocates of exploiting the deaths to score political points.

As for a solution, Pence added: “Eroding the rights of law-abiding citizens is not the answer.”

State Rep. Wayne MacDonald acknowledged Pence’s strong social conservative stance might not be New Hampshire style Republicanism, but he noted Pence has made several trips to the state, a sign he’s willing to work here to woe Granite State voters.

“We like that here,” MacDonald said of his fellow New Hampshire Republicans. “And it’s still very early. We’ve got to see what happens in 2022, and how the campaigning in other primary states goes. We’ll see.”

Several Granite State Republican activists who declined to go on the record threw cold water on the idea of Pence winning the presidential nomination, either in New Hampshire or nationwide.

“Being such an Evangelical is a problem in the [New Hampshire] primary. Trump supporters wanting to hang you is another. Either one is tough. But both? No way,” one GOP strategist said.